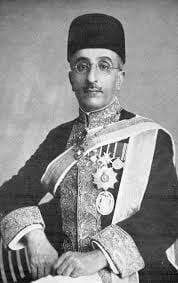 Indian history has seen several rulers and monarchs and has undergone various changes that are historically identified, criticised, as well as celebrated even to this day. For a monarch to reign in just ways, the need of an advisor is very significant. In the history of #Karnataka, this role was played by the #Diwans (equivalent to the Prime Ministers of today). Diwans played the role of a Prime minister in their respective kingdoms.

He was appointed an Officer of the Order of the British Empire (OBE) in 1922 and was knighted in 1936. He was further appointed a Knight Commander (KCIE) in 1936.

Citizens of #Bengaluru identify him as the grandson of Ali Asker, the Persian trader who has a lot of Bengaluru’s legacy to his name. Today, we remember his contributions to the cities of Karnataka during his time as Diwan of Mysore.

1. Identified as the architect of “Beautiful Bengaluru”, he was responsible for the building of Town Hall as well as the Jamia Masjid mosque which are located near to each other. Town hall was built by the king of Mysore and designed by Mirza Ismail.

2. He supervised the construction of the eastern wing of Lalbagh’s Glass House.

3. According to the popular anecdote concerning the Queen of Bajang and her parrot, the money granted by the queen for the protection of the parrot was well used for the setting up of the fountain which stands proud in front of the statue of Maharaja Chamaraja Wodeyar in #CubbonPark. (Sir Mirza promised to take care of the parrot and requested her to grant the money for this project; however she went back to Bombay with her parents and died there).

4. It has been well established that Sir Mirza Ismail was the reason behind the development of #KannnadaSahityaParishath as well.

5. He was a very sensitive and concerned officer and had been quite sympathetic towards his citizens. He had helped arrange water pipelines and other basic necessities to their households.

6. During his time as Diwan of Mysore, several factories were established. The Hindustan Aeronautics Limited (#HAL), the Porcelain factory and the Glass Factory were established in Bengaluru.

7. The sugar factory at Shimoga and the Khadi production centre at Badanval were also set up during his period.

8. He was also responsible for the extension of several areas of Bengaluru such as Kalasipalya, N R Colony, Wilson Gardens, Labour colony in Srirampura and the Dattatreya extension in Chamarajapete among many others.

9. He was also responsible for the negotiation for the collaboration of #BangaloreCantonment into the Bangalore City during the British rule.

10. He laid down scientific plans for the establishment of parks and gardens in Bengaluru and is the main reason why Bangalore got its name as the #GardenCity.

He was quite concerned about the citizens and always worked towards their development. He spoke on several occasions on the need for better officials and administrators. On one such occasion he commented, “… Do not hesitate to correct your superior, if you think he is wrong, and encourage your subordinates to do the same to you. We are apt to acquire a taste for flattery. It is rather ignoble taste even in our home or in club; it is devastating if it affects ones public life.”