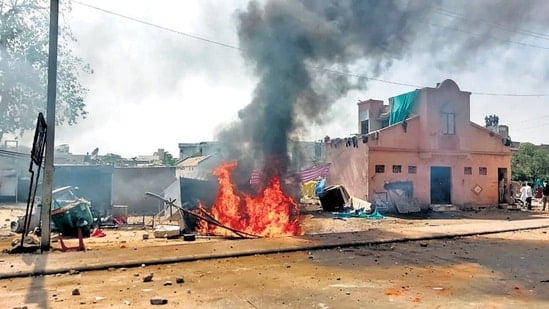 At least ten houses were set on fire in Madhya Pradesh, and more than two dozen people were seriously injured in conflicts that occurred during Ram Navami processions in various districts of Khargone, including Superintendent of Police (SP) Siddharth Choudhary. Places where violence was reported during Ram Navami. (Image: Siasat)

Communal riots erupted in Gujarat’s Himmat Nagar and Khambhat towns, forcing police to use tear gas to disperse mobs that threw stones at each other and destroyed stores and vehicles in both locations. Some individuals allegedly celebrated Ram Navami while wielding swords as part of the parade at 1 p.m. on Sunday in Himmatnagar town, Sabarkantha district. Locals said that these people interacted forcefully with local Muslims when the procession entered Ashraf Nagar, a Muslim-dominated region between two Hindu neighbourhoods, Shakti Nagar and Mahavir Nagar.

According to Hozefa Ujjaini, a social activist, the violence in Himmatnagar and Khambat on Sunday extremely similar to the pattern seen in Rajasthan’s Karauli, when Muslim houses were set fire. On Holi, Muslims in Sandheli, a town 100 kilometres from Himmatnagar, faced harassment, violence, and anti-Muslim slurs, he recounted.

Locals living near Himmatnagar told The Wire that Muslim homes, stores, and places of worship such as dargahs and mosques were drenched in kerosene, looted, and vandalised as Ramzan came to a close. Two houses, the Dargah of Zorawar Baba, the Dargah of Gebanshah Peer and its neighbouring mosque, a dozen cars, Muslim-owned shops, bike showrooms, the Dargah of Gulab Shah Peer, the Hassan Fareed dargah, and 13 dargahs near Himmatnagar’s Hathmati river were all reportedly vandalised in under 8 hours.

The Madhya Pradesh government has issued a notice to authorities in all districts for the forthcoming festivals in view of the violence in Khargone city and Barwani district during Ram Navami, state Home Minister Dr Narottam Mishra said on Wednesday.
In the next days, holidays such as Mahavir Jayanti, Good Friday, and Hanuman Jayanti will be celebrated, in addition to Dr. BR Ambedkar’s birth anniversary and Ramzan.

The state police headquarters issued instructions cancelling the leaves of all police officers in the state a day after the incident in Khargone, citing the forthcoming festivals. The leave is sanctioned by the superintendents of police (SPs) and inspector generals (IGs) of various districts and zones.

Mishra, who is the State government spokesman, said “Several festivals are to be observed in the coming days. In view of this, all districts of Madhya Pradesh are on alert. Chief Minister Shivraj Singh Chouhan has instructed all ministers in-charge of districts to keep a watch on the situation in their respective areas as a precautionary measure.”

On Sunday, a curfew was enforced throughout the whole city of Khargone after stone-pelting during the Ram Navami celebration resulted in arson and vehicle torching.