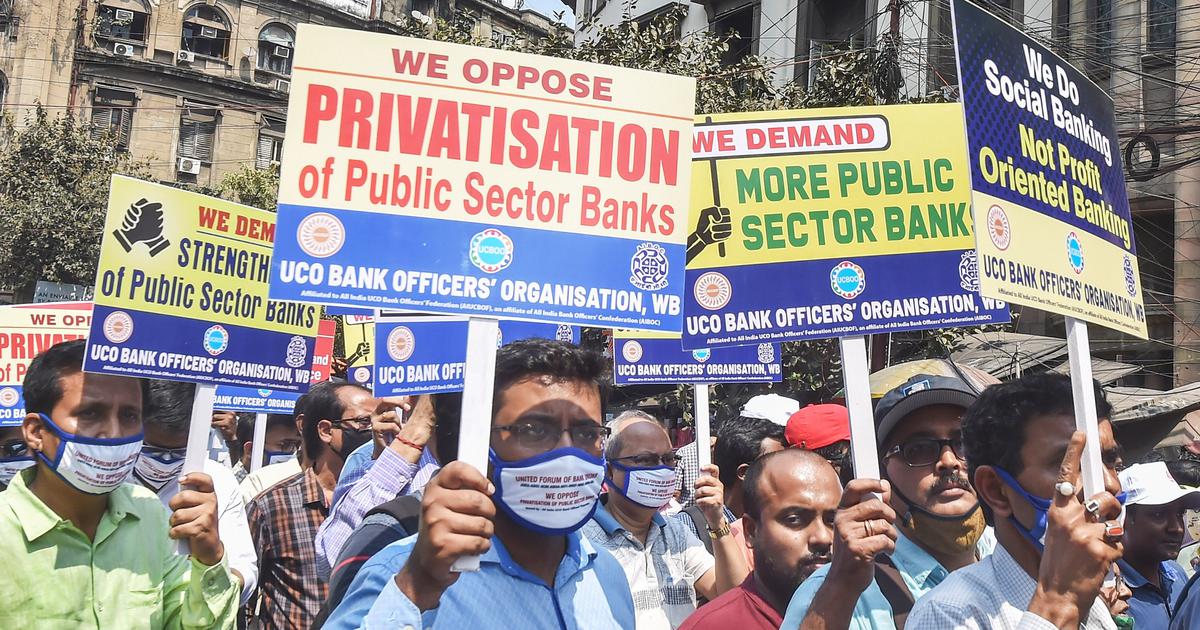 Thousands of public bank employees called a strike for 2 two days on 15th and 16th March 2021, which caused a disruption in the service across the country. The Finance Minister Nirmala Sitharaman said that the government is planning to privatize two public sector banks as a part of a large force by the government to pick up stakes in the government owned firms in different sectors that were to be identified by Niti Aayog. The reason for the stake sale in public sector units was the need for revenue at the time of Covid-19 pandemic which destroyed all the calculation of the government for raising funds, along with this it was also fulfilling the promise of “More Governance and Less Government” a slogan which the BJP promoted during its 2014 general election campaign. The government plans to raise 1.75 lakh crore through disinvestment of state owned units which includes two public sector banks and a general insurance firm. The government has privatized IDBI Bank by selling the majority of its stake to LIC and also merged 14 public sector banks in the past four years. The service at branch level, cheque clearance and government transaction have been affected according to All India Bank Employees Association (AIBEA) and along with this the stock market will also get effected as payments would be impacted.

Banks were closed on 13th March (second Saturday) and 14th March (Sunday) along with 15th and 16th of March for the strike; for consecutive four days banks were closed though they have elucidated that the online banking facilities will remain operational on strike days. Pankaj Kapoor General Secretary Bank of India officer association Delhi said “The budget announcement said two banks and an insurance company will be privatized in the name of disinvestment. Nobody knows what this disinvestment is and who knows where the money from disinvestment goes? The names of the banks were not mentioned in the Union Finance Minister’s speech which shows that the government has no planning and preparation. They are not ready to talk with the banker for whom they are formulating these policies.” Services like cheque clearance, deposit withdrawal, loans clearance may get affected because of the strike but ATM will remain functional. Private Banks like ICICI, Axis, and HDFC bank are open as they are not a part of the strike.

Strike by the Insurance Company:

After the two day strike by the banking union now the unions in the public sector general insurance companies will go on strike on 17th March 2021 (Wednesday) and Life Insurance Corporation of India on 18th March 2021 (Thursday).  The joined strike is held to protest against the government’s decision to privatize one of the general insurance companies, increasing its foreign investment limit to 74% and deny stakes in LIC by an initial public offer (IPO). The LIC management has now offered a 16% wage hike after four rounds of talks. The union also wants implementation of demands like ending the NPS scheme, including benefits of the pension scheme 1995 and wage revision which is pending since August 2017.  The four Public Sector Undertaking non-life insurance : National Insurance Company Ltd, The Oriental Insurance Company Ltd, The New India Assurance Company Ltd, , and United India Insurance Company Ltd, which has over 7,500 branches and total employee strength is 60,000.

The protesters and the people of the nation are awaiting a response from the government on this matter.

What is your take on privatization; write to us in the comments.