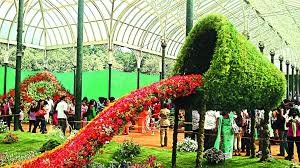 Bengaluru is a crowd favourite for a lot of reasons, for the filter coffee and for the moody rains and a lot of other things accompanying them. One another thing that entertains and pulls us towards it is the #FlowerShow at #Lalbagh. Annually, two flower shows are organised on the 15th of August and on the 26th of January for the celebrations of Independence Day and Republic Day respectively.

It is almost a ritual to go attend parades at schools and rush towards the Lalbagh Botanical Garden to seep in all the creativity that is exhibited. This year, as a result of the ever so troubling #Coronavirus, the flower show on Independence Day was previously cancelled. Every year the flower show carries different themes owing to local and national on-goings. The fact that the theme would be differing for both the annual flower shows is quite applaud worthy.

Fans and enthusiasts all over the world make it a task to visit this event. It was recorded that it draws in lakhs of visitors. Issuing a statement about the cancellation, M Jagadeesh, joint director- parks and gardens, had previously said that, “The planning process for the flower show starts four months earlier and work on the ground begins two weeks in advance. We have not been able to do anything because of the outbreak. We hope to plan later this year and hold the Republic Day edition.”

Somewhere in our minds, we hoped to see the flower show model versions of the troublesome virus, the #CoronaWarriors as well as children with their online classes being depicted with wholesome creativity. Alas! This imagination of ours has to come to a halt as the horticulture department in alliance with Mysore Udyana Kala Sangha (Mysore horticultural society) have come to a decision to cancel the Republic Day flower show for the year 2021. For the flower show to have had happened in January, the preparation had to have started as early as October. Speaking about the decision, Khajanchi Kuppuswami, a member of the Mysore Horticultural society, expressed that it is rather difficult to get the permission from the government to host the event and even if that is possible, there is a high chance that the public would not be willing to visit, owing to the pandemic.

In lights of such developments, the only last resort is to remember all the shows hosted before and think about our favourite anecdotes.

1. The first ever flower show in the year 1912 was a humble attempt to educate and showcase the botanical riches of the garden to the people of Karnataka, and subsequently to people of the nation and the visitors from all over the world.

Much is there to be told about the origins of the botanical garden. It is recollected from time to time that the garden started as a mere orchard in the Bangalore Fort by #HyderAli way back in the 1760s. It has also been observed that the growth of native and exotic flora in the garden was all due to his son, #TippuSultan. However, since John Cameron took up the position of superintendent in the year 1874, much more importance to development was given. The tradition of the flower show is recorded to have started by Cameron as well. However, GH Krumbiegel who took up the position moved it forward and made it a regular event. It was observed that the whole concept of flower shows at Lalbagh was inspired by the show at Chelsea which is organized by London’s Royal Horticultural Society.

2. One fun fact is that in the earlier instalments of the flower show at Lalbagh, it featured wild animals such as leopards, bears, elephants, peacocks and monkeys from nearby forest areas. However, these animals were later shifted to the Mysore Zoo in the year 1920.

3. Around the early years of 1930s, the common tradition was to feature jardinières (decorative or ornamental pots to display growing plants). Recalling the tradition, Harish Padmanabha, the grandson of HC Javaraya (who took over the position of superintendent in 1932), explained that, “The interior display included a mix of potted plants in brass and porcelain while the exterior had landscape elements of moulded clay and terracotta.”

4. A new trend that was introduced in the 1950s is that, displays of models by public sector companies such as BEL, HAL and HMT was a common attraction.

5. It was also a common practice to auction the exhibited plants after the show as it was cumbersome to carry back. This was observed up until the 1980s.

6. The Republic Day (2015), event was the most spectacular as it featured several musical

instruments created with thousands of flowers. With the backdrop of the visit of

#BarackObama to India that year, the flower show also had flower model replicas of the Red Fort as well as the Statue of Liberty.

7. In the year 2015, the Independence Day edition witnessed the Bangalore Palace which was recreated using 20,000 red roses and an instalment of grass elephants and the towers at the Palace which were all quite panoramic.

8. The Republic Day event of the year 2017 had the life size replica of the architectural wonder Gol Gumbaz.

9. For the Republic Day edition of the year 2019, the beloved Mahatma was celebrated.

As the year marked the 150th Birth Anniversary of #MahatmaGandhi, this theme was chosen. The main attractions of this event were the flower model of the Sabarmati Ashram as well as many models of the Mahatma himself. This event also featured the model of Gandhi’s three philosophical monkeys as well.

Wadeyar with all its creativity, as the state celebrated his centenary. At the event, many life achievements of the ever so talented king were celebrated. The many buildings and government departments established by him as well as his love for arts and culture were depicted thoroughly. This event had a record breaking collection of Rs 80, 70,000 in a single day.

11. Speaking on the event on the Independence Day of 2019, MV Venkatesh, Director, Horticulture Department recalled that the last year’s show was the 210th flower show at Lalbagh and that the tradition started in 1912. The shows were hosted twice a year back then as well, however they were called the Summer and the Winter show. It was only in the year 1951 that these shows began celebrating the Independence and the Republic Days.

12. The Republic Day 2020 flower show was a treat to watch as it commemorated the

157th birth anniversary of #SwamiVivekananda. The event paid tribute to the great thinker by establishing the floral models of Vivekananda Rock Memorial in Kanyakumari as well as a life-size statue of the legend himself.

This year was the first time that the flower show was cancelled after the attainment of India’s Independence. The show had only been cancelled once during the WWII before and to think of the parallels between that period and the times of today makes me anguished.