NETIZENS TO THE RESCUE AGAIN: PLANT SELLER GETS A CANOPY TO SELL COMFORTABLY 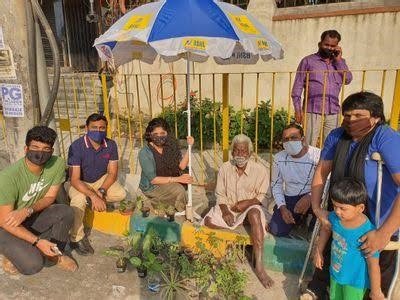 Social media with all its perks has been quite useful in this era. If you ignore the fact that it gets you addicted, it has been very effectively used for activities such as growing and promoting small businesses, creating awareness about pressing issues as well as making something trendy enough to get people to notice and take action.

This Covid-19 induced lockdown has been financially devastating to most sections of the society and the poor and homeless are the worst hit. It was observed by CMIE – Centre for Monitoring Indian Economy, that as of May 2020, the rate of unemployment had increased up to 27%.

People with small businesses have had to lose their livelihoods as a result of the commotion in the world right now. However, due to the timely action of netizens and several NGOs, some of these businesses have been able to be resurrected. Recently two such incidents have come to light, one concerning the #BabaKaDhaba and the other with an old man from #Bengaluru, both struggling to meet ends.

This has been possible thanks to Twitter, the micro blogging and social networking site that uses tweets to communicate. Talking about timely action on Twitter, on the 8th of October 2020, a heart-breaking video went viral. This video of an 80 year old couple Kanta Prasad and Badami Devi selling #MattarPaneer and other delicacies at their dhaba went viral immediately.

Netizen Vasundhara Tankha Sharma uploaded this video, urging people of Delhi to go try their food. “Dilli waalon please please go eat at Baba Ka dhaba is Malviya Nagar if you get a chance”, she tweeted. The video was however primarily uploaded by a Facebook page called #SwadOfficial.

Following this, several retweets were made and the attempt was so successful that #Zomato added the eatery to their list of restaurants to order from.

On Monday the 26th of October, 2020 a similar incident was witnessed. This is a story of an old man who sells plants on the streets of Bengaluru. Identified as Revana Siddappa, this man sells plants that cost merely 10 to 30 Indian rupees.

IMShubham took to twitter to announce this and urge people to indulge in purchases with the old seller. “Meet Revana Siddappa, an old man, who sells plants at Kanakapura road near Sarakki signal, Karnataka. Price of these plants is from Rs10-30. ….. Plz support this man”, he tweeted whilst tagging IFS officer Parveen Kaswan and several actors such as Madhavan and Sonu Sood. This tweet went viral immediately and gained over 2.2K retweets and 6.2K likes. The tweet caught the attention of Randeep Hooda who asked for further details about the address and retweeted asking Bengaluru to show some love.

Following this, people from #ChangemakersOfKanakapuraRoad helped build a shelter in the form of a canopy so that the old man would be able to sit in shade while he sells his plants. They provided more plants as well as a chair and a table for the comfort of Siddappa. They even took to twitter to request citizens of Bengaluru to help them raise funds so as to provide opportunities for Siddappa to receive sustainable income.

Much can be said about how the social media negatively impacts us, however when some good deed as such is witnessed, a part of the negativity is nullified.

What is #PMSVANidhi Scheme and who are its #beneficiaries?