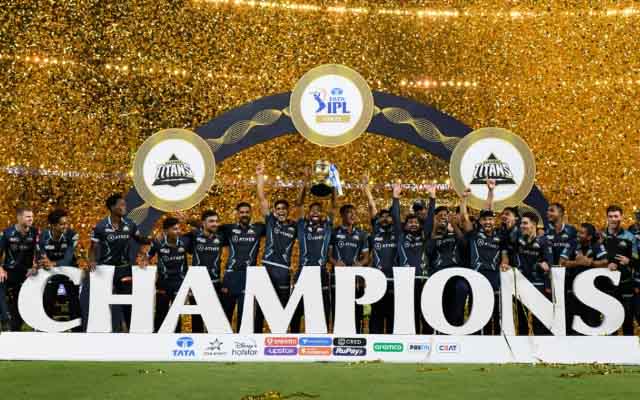 The final of IPL 2022 saw the new team Gujarat Titans clinch their maiden title. However, fans on social media were quite skeptical of its victory and gave a number of reasons for feeling so.

The Titans defeated Rajasthan Royals by seven wickets in front of a large home crowd at the Narendra Modi Stadium in Ahmedabad. Skipper Hardik Pandya was at the forefront of Gujarat’s victory as he took 3 wickets from four overs with the dismissals of Sanju Samson, Jos Buttler, and Shimron Hetmyer.

Barring Buttler (39) and Yashasvi Jaiswal (22), no other batter was able to score above twenty runs as the Royals posted a meager score of 130 in the first innings. In the second inning, Pace bowlers Prasidh Krishna and Trent Boult gave them hopes with early wickets of Wriddhiman Saha and Matthew Wade in the first six overs.
Titans skipper Hardik and opener Shubman Gill put a calm and patient 63-run stand for the third wicket to overcome the threat posed by the Royals at the halfway mark.

Samson made a wrong decision by handing the bowl to Ashwin in the 12th over. Hardik decided to open his hands against the off-spinner with a four and a six in successive balls as Ashwin conceded 15 runs in the first over.

Hardik pandya doesn't look that excited..looks like he knew the result before the game #fixing

Yuzvendra Chahal dismissed Hardik later, ending the partnership. However, Miler continued from where Hardik left off. Miller whacked Ashwin for a six over mid-wicket before hitting a couple of boundaries during Prasidh’s over. Gill hit the winning sixer over square leg to finish the game with 11 balls to spare.

However, the Twitteratis have been trending the #fixing ever since the match ended. Many social media users alleged that the fact that the Union Minister and BCCI secretary hail from Gujarat, was clearly responsible for the Titans’ win.

Apart from Gujarati celebrities attending the final, fans blamed the home ground as well as the attitude of Hardik Pandya for claiming that the match was ‘fixed’. Some even made it political, saying that the same would be seen in Gujarat elections later this year.

However, the reactions of netizens must be taken with a pinch of salt, as it cannot be denied that the Gujarat titans have been the most consistent team ever since the start of this season. They performed well in the playoffs as well.
Different players stepped up for their team at crucial moments of IPL 2022. While Hardik impressed with his all-rounder abilities, David Miller had his best IPL season thanks to the role clarity and the backing he got. The bowling attack of Mohammed Shami and Rashid Khan, with others playing a supporting role, was one of the best too.

*Some People After IPL Finale*

It is apparent that hard work, teamwork, and consistency led Gujarat titans to victory. However, who can stop the netizens from expressing their views on social media that has led to #fixing trending on Twitter.