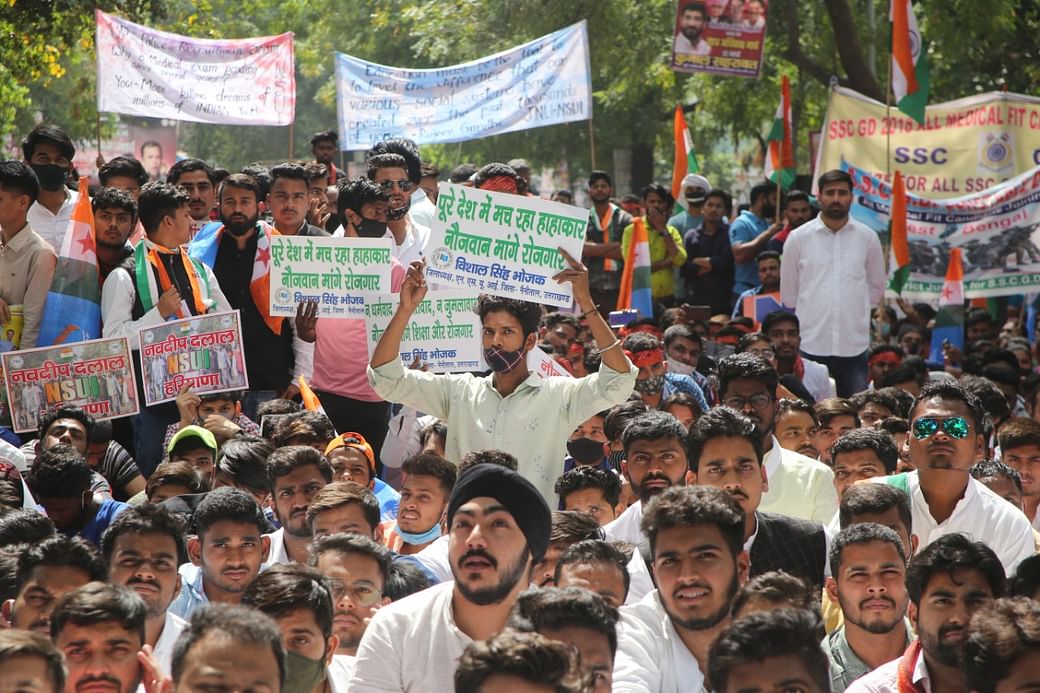 The Centre is facing an uproar over rising unemployment from all over the nation. Failure to keep the promise of providing ‘two crore jobs’ has urged the students to hit the streets, a job cry everywhere. Demanding justice for the youth of India, biggest victim of unemployment in the country, NSUI led a protest march from National Students’ Union of India (NSUI) headquarters to the Parliament on Friday.

Students’ wing of Congress, NSUI, have started a campaign named “Naukri Do Ya Degree Wapas Lo” (Give jobs or take back the degrees) on Friday. The motive of this campaign is to question one such electoral promise made by the BJP government where they have promised to provide two-crore jobs and employment. The day has come where unemployment rate is rising with leaps and bounds and the statements used by the government in-power to lure the voters during the elections is being questioned.

The NSUI (National Students’ Union of India) took to the streets of Delhi on Friday to carry out a “Chhatra Adhikar March”. The protest is to mark and highlight the curse of unemployment and how the Modi government has broken all its promises. This betrayal of the Modi government is being questioned by the senior leaders of Congress who were a part of this protest.

The speakers at the protest recalled how the Modi government has not taken any steps to counter the rising unemployment rate, how they have shown a passive attitude towards this serious issue which needs utmost attention. Also, the speakers have brought in the question how the government is least bothered about the sufferings of the youth caused due to scams and delays in conducting exams, no recruitment after selection. The government’s decision for lateral entry into the system was described as a sinister conspiracy against lakhs of students preparing for civil services.

In retaliation to this action of NSUI, the government had ordered the police to lathicharge the thousands of students who wanted to gherao the parliament. The students protesting were continuously prompting Rahul Gandhi to tweet: “Students want jobs. But the government is giving police batons, water guns, anti-national tag and unemployment.”

While the students, along with NSUI president Neeraj Kundan, were taken into preventive custody, the party claimed a large number of boys and girls were injured in the unprovoked and brutal lathicharge. The students who were trying to climb the barricades were brutally beaten by batons and were detained. The party also ran a social media campaign under the hashtag #StudentsWantJobs, which trended throughout the day with lakhs of tweets. The NSUI has asked the students from across the country to join the campaign by giving a missed call to a particular number.

“This protest was one of the largest protests by the NSUI. The protest challenged the government’s power and failing the expectations of the students. The reduced budget for education sector, issue of scholarships and fellowship grants… the lists go on. The BJP government has totally thwarted the belief and trust of students,” Mr. Kundan said.