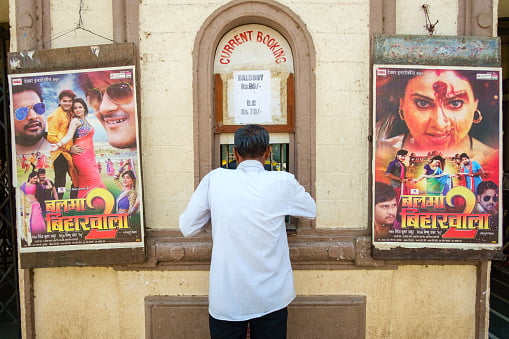 Mumbai, India - May 10, 2016: A man buys movie tickets at the box office outside with Indian movie posters on each side.

The COVID 19 pandemic has affected all facets of social life in the country. Indian film industries have been the most affected by the same, as a result of which 2020 saw heavy losses for films across languages in India.

As the second half of 2021 seemed to bring a breeze of some ‘normalcy’ back. The theatres opened up, and the likes of ‘Sooryavanshi’, ‘Pushpa’, ‘Spiderman – No Way Home’ fared well.

As things looked better, India found itself amidst the third wave, and the rescheduling of the awaited films began. Hoping for things to get better, here is the list of the top 10 most awaited films of 2022 across Indian languages.

Sanjay Leela Bhansali’s last film was a massive success and a major talking point in the news. The ‘Padmavat’ director returns after four years with another film, called ‘Gangubai Kathiawadi’. The Alia Bhatt – starrer film is based on a book by Hussain Zaidi, called the ‘Mafia Queens of Mumbai’.

The real-life account is set as a crime drama. The teaser of the film gained enough traction from the netizens. The film will also have Ajay Devgn in a cameo.

After the roaring success of Master, Vijay would bring ‘Beast’ to theatres in 2022. Veteran director A.R Murrugodas was supposed to direct the film, he was later replaced by Nelson, who wrote a new script for the movie.

Besides Vijay, the movie also has Pooja Hegde and Yogi Babu in its cast. It is supposedly a dark comedy action thriller movie. ‘Beast’ will be released in April 2022.

Sandeep Reddy Vanga became a sensation after his first Hindi film. It was not only the content of the film but also the promotional interviews that made him go viral.

The acclaimed ‘Kabir Singh’ director has earned some fan following around the country, riding on which his next film has become one of the most anticipated films of 2022.

Ranbir Kapoor who has been absent from the screen for 4 years will have some back-to-back releases this year, ‘Animal’ is one of them. The psycho-thriller has a stellar star cast which includes the likes of Anil Kapoor, Bobby Deol, and Parineeti Chopra besides the main lead.

The Hindi film industry is not the most franchisee-friendly place. However, Salman’s Tiger franchise has been an exception. After a mediocre run at the Box Office off late, Khan would be happy to be back in the same action space which has earned him his star status.

The third edition of the movie will have Emraan Hashmi as the antagonist. According to the reports, the movie will also have a cameo from Shah Rukh Khan, making it an even bigger affair.

Om Raut made a stunning debut in the Hindi film industry as a director with ‘Tanhaji’. The filmmaker who is aware of the historical space having made two biopics (Lokmanya, a Marathi movie) will be diving into familiar waters with much more to offer.

Adipurush is the recreation of ‘Ramayana’ on celluloid with superstar Prabhas essaying the titular role of Ram in the same. In an interesting casting choice, Saif Ali Khan, who was the star antagonist of ‘Tanhaji’ will be seen as ‘Ravana’.

Shah Rukh Khan has been missing from the celluloid since ‘Zero’, which was released in 2018. The underwhelming performance of the film came as a shock to the industry. Although the star has been busy with other endeavors, there have been plenty of rumours of his next few films, which would potentially mark a new phase in his career.

Produced by Yash Raj, Pathan is touted as a spy thriller, also has Deepika Padukone and John Abraham in important roles.

Much awaited Brahmastra found itself another release date in 2022. The film has been pushed ahead due to production issues and lockdown.

The sci-fi starring Ranbir Kapoor, Alia Bhatt, Amitabh Bachchan, and Nagarjuna has enough mettle on casting level, although the fans would be hoping for it to translate well on screen. Ayan Mukherjee, who has directed films like ‘Wake Up Sid’ and ‘Yeh Jawaani hai deewani’ is at the helm of the project.

The path-breaking Kannada film ‘KGF’ will have its part two released in 2022. The Yash-led action thriller has also undergone enough production delay. Although considering the response to the teaser and posters, it is expected that part two of the franchise would recreate the magic of its predecessor.

In an extended cast from the first movie, it also has the likes of Sanjay Dutt and Raveena Tandon essaying crucial roles

SS Rajamouli’s RRR was supposed to release in the first week of 2022, although it got indefinitely postponed due to the pandemic. This historical is a fictional take on two real-life characters who fought against the British empire in the 1920s.

Jr. NTR and Ram Charan, along with Alia Bhatt and Ajay Devgn complete the cast of the film. There has been a continuous buzz around the film since the time it was announced. After the Baahubali franchise, this is the first film by Rajamouli.

Aamir Khan did not have the best time at the box office with his last movie, ‘Thugs of Hindustan’. The actor, who is known for a keen eye, as far as scripts are concerned, is bringing in the Hindi remake of the classic ‘Forrest Gump’.

Aamir Khan will be playing the ‘Forest’ character, named Lal Singh Chadda. The rest of the cast includes the likes of Kareena Kapoor Khan and Naga Chaitanya. Atul Kulkarni has translated the film to the Indian context.