The Modi Government and protest have a deep connection.

One such violent protest has erupted again in parts of Bihar Haryana and various parts of the Northern states.

These protests have been regarding the new Army recruitment policy set by the government, named ‘Agnipath’. The Central Government had unveiled Agnipath on Tuesday under which most soldiers will leave service in just four years — 45,000 to 50,000 aspirants will be recruited annually but only 25 per cent will be allowed to continue for another 15 years under permanent commission.

The status of Anti-Agnipath Protests till now

Railway services have been disrupted as protestors blocked the tracks and vandalised coaches and other railway properties.

Anticipating violence in the state, the Haryana government has suspended internet services in Faridabad district’s Ballabgarh, whereas prohibitory orders under Section 144, restricting gathering of more than four persons, have been imposed in Gurgaon, the police said.

Haryana govt orders suspension of mobile internet services, all SMS services in view of potential law and order situation in the wake of new army recruitment policy. Order shall be in force for next 24 hours with immediate effect i.e. till 16:30 hours (tomorrow) pic.twitter.com/eoMsa9HQgx

In Telangana, one protester lost his life while several others were injured, after the police allegedly opened fire on a mob at Secunderabad railway station.

In Haryana’s Palwal, over 20 police and government personnel were injured and five official vehicles were set on fire by protesters who gheraoed the Deputy Commissioner’s office near Agra Chowk.

In separate incidents, protesters torched two coaches — one at the Sidhwalia station in Gopalganj, where passengers had to rush out to save themselves, and the other in Chhapra.

No injuries were reported.

Confirming the damage caused, Bihar ADGP (law and order) Sanjay Singh said the police have so far “arrested 125 people for the violent protests”.

The Railways said 34 trains were fully cancelled and eight partially, with 72 trains either detained at stations or running late, because of the agitation.

As protests turned violent in the neighbouring state of Bihar Uttar Pradesh chief minister Yogi Adityanath on Thursday urged the youth to not get “misled” by anyone.

According to him, the Agnipath scheme will provide a new dimension to their lives along with a “golden foundation”. 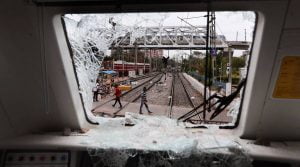 A Railway Engine was Destroyed in Secundrabad railroad station in Hyderabad
Credits:- The Indian Express

He tweeted in Hindi “There has been an atmosphere of discontent, disappointment and fear of a dark future because of unemployment after the announcement of the Agnipath scheme. The Centre should revisit the Agnipath scheme immediately because it is related to the country’s safety and security.”

JD(U) is BJP’s ally which is running Bihar’s Government.

Senior JD(U) leader and Bihar Minister Bijendra Prasad Yadav called on the Centre to “talk to representatives of the students”. 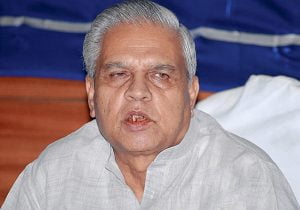 While the opposition parties attacked the Centre for “ignoring the grievances of unemployed youth”, especially in rural areas, and “not respecting” the Armed Forces.

The response of the government.

After a day that saw large groups of youths blocking roads, pelting stones, torching train coaches, and targeting BJP offices and leaders, the Defence Ministry said that it would allow those who were 21 years old in 2020, when recruitments were stalled, to be eligible — only for this year.

The Ministry said that since “it has not been possible to undertake the recruitment during the last two years, the Government has decided that a one-time waiver shall be granted for the proposed recruitment cycle for 2022”.

In the wake of widespread protests across the country over the #AgnipathScheme, wrote to the Chairman, Parliament Standing Committee on Defence, which I am a member of, to convene an urgent meeting to discuss in detail the scheme with all stakeholders & defence experts. pic.twitter.com/o1TLAzDvel