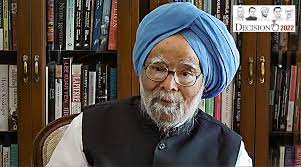 Dr.Manmohan Singh addressed the people of Punjab on Thursday ahead of the February 20 polls and called out the Narendra Modi government on management failures, logical fallacies, malpractices, security failures, a failing economy, unemployment, divisive politics, and much more.

In the video released, he was seen addressing the people in Punjabi, on a bunch of issues, inclusive of the farmers’ agitation, stagflation, unemployment, and foreign policy, he accused the BJP of following a “fake nationalism” that accompanied the policy of divide and rule that the British employed to exploit our nation. He pointed out the constant blame-shifting and unaccountability of the Modi-led Government that blames the country’s first Prime Minister Jawaharlal Nehru for any issue that is put forth.

The PM's position has dignity. A PM should not blame history to downplay their own faults. When I was PM for 10 years, I spoke through my work. I never let the country lose its prestige before the world, never undermined India's pride – Dr Manmohan Singhhttps://t.co/BTAjBpw1kH

While talking about failing foreign policies, he said “Chinese soldiers are sitting inside our pious land…but efforts are being made to suppress this whole matter. Old friends are being alienated, while our relations with neighboring countries are deteriorating.”

“On the one hand, people are facing problems of price rise and unemployment and on the other, the government, which has been in power for the last seven and a half years, rather than admitting their mistakes and making amends, is still blaming first Prime Minister Jawaharlal Nehru for being responsible for people’s problems, I firmly believe that the Prime Minister’s post has a special dignity and by blaming history one cannot reduce one’s sins. Working as the Prime Minister for 10 years, I always preferred that my work should speak for itself. We never divided the country for political gains. We never tried to put curtains on the truth. Never allowed the country’s prestige to be lowered… The fake nationalism of this government is equally hollow and dangerous… This government has no faith in the Constitution.” he said.

People are remembering our (Congress) good work. They (BJP) tried to dishonour Punjab CM&people of the state over PM Modi's security issue. Rich people are getting richer while the poor people are getting poorer: Former PM & Congress leader Manmohan Singh #PunjabAssemblyelection pic.twitter.com/ub8hYK9qn3