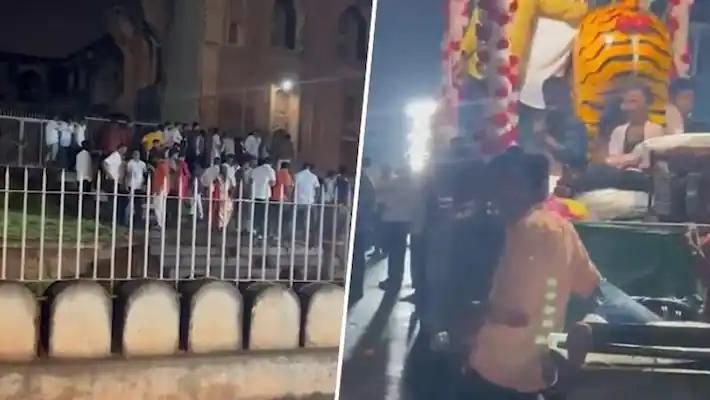 Tension gripped Karnataka’s Bidar district after a mob participating in a procession of Dussehra allegedly broke into the premises of Mahmud Gawan, a heritage Madrasa, and performed pooja in the early hours of Thursday. The police have deployed security near the site. 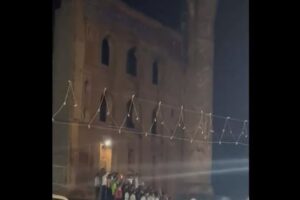 The police action came following outrage over videos shared on social media that showed a mob entering the grounds of the mosque, which is a heritage site under the Archeological Survey of India. The mob was allegedly there to perform puja on Dussehra on October 6.

Members of the Muslim community filed a complaint with the police, alleging that the crowd tried to break open the gate and raised ‘Bharat Mata Ki Jai’ slogans. They also alleged that the crowd threatened the security person there and dumped garbage on the wall of the mosque.

It was added that the Mahmud Gawan Madarsa mosque comes under the Archaeological Survey of India (ASI). “The video was made viral. In the afternoon, members from the Muslim community as well as the ASI went and filed a police complaint. An FIR has been registered,” according to another news portal.

The madrasa is a heritage building maintained by the Archeological Survey of India (ASI). Built in the 1460s, the ancient structure reflects the regional style of Indo-Islamic architecture under the Bahmani Sultanate. The heritage structure is placed under the list of monuments of national importance.

Inspector General of Police, Gulbarga said that every year Hindus go near the Masjid to perform Puja on Vijayadashmi and this occurrence is not new. It would seem like it was only this year that the Muslims of the area decided to stop Hindus and raise alarm over the incident. 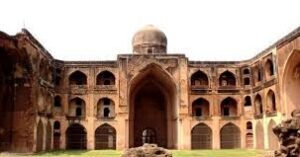 AIMIM chief Asaduddin Owaisi took to Twitter to fear monger, “Visuals from historic Mahmud Gawan masjid & madrasa, Bidar, #Karnataka  (5th October). Extremists broke the gate lock & attempted to desecrate. @BSBommai how can you allow this to happen? BJP is promoting such activity only to demean Muslims.”.

It is pertinent to note that the police have gone on the record to say that Hindus offering Puja at the Mahmood Gewan Madarsa and Mosque on Vijaydashmi is an event that takes place every year. They have also clarified that contrary to what Muslim leaders like Asaduddin Owaisi are claiming, nobody attempted to break the lock of the mosque to illegally enter it.

Mahmud Gawan was a powerful prime minister of the Bahmani empire, who held the position during the reign of Shamsuddin Muhammed III, who actually became king when he was 9-10 years old. One of his major contributions is the madrasa (then a college/institution), of which the minaret alone rises to 100 feet, while the length of the edifice rises to a height of 205 feet. Half of the monument’s frontage was destroyed due to a gunpowder explosion in 1695/96.

In this article:bidar, dussehra, mahmud gawan