Earlier this year, a 74-year-old autorickshaw driver in the Silicon Valley of India became an internet sensation after a LinkedIn post by Nikita Iyer became viral. Pataabi Raman was an English professor before retiring at the age of 60 and he soon started driving an auto for a living for 14 years.

His story came to the limelight when a LinkedIn post by Nikita Iyer went viral. According to the post, Ms Iyer shared a 45-minute journey with him and conversed with him in fluent English. According to her post, she was astounded to hear him speak English fluently.

Ms Iyer described being stranded in the middle of the highway by an Uber driver in her post. She tried asking various autodrivers to drop her off at her destination, but a few quoted an exorbitant charge, while others refused to drop her off.

Seeing her worried expression, Mr Raman approached her and asked her about her situation. She told Mr Raman that she was getting late to reach her office. Understanding the situation Mr Raman politely told her in fluent English to pay him whatever she wishes. She was taken aback by his English and was curious about how he was fluent in the language.

Ms Iyer asked him how he was fluent in English. He told her that he was an English lecturer and completed his MA while holding an M.Ed.

He told Ms Iyer that when he tried to get a job in Bengaluru, he was asked constantly about his caste, and when he told them, they simply said, “We will let you know.” He had had enough of the responses and packed his belongings and relocated to Mumbai.

He told her that he worked as a college lecturer in a college in Powai, Mumbai for nearly 20 years and had driven auto for the past 14 years. He later retired and returned to Bengaluru; however, he could not get a job that would pay enough for his daily expenses.

She further writes, “She is my wife but I call her my girlfriend because you must always treat them as equal. The minute you say, wife, husbands think she’s a slave who must serve you but she is in no way inferior to me, in fact, she is superior to me sometimes. She is 72 and takes care of the house while I work for 9-10 hours a day. We live in a 1 BHK in Kadugodi where my son helps pay the rent of 12,000/- but beyond that, we are not dependent on our children. They live their life and we live ours happily. Now I am the Raja of my road, I can take my auto out any time I want and work when I want.”

After seeing this story, Team NewsHamster tried to find him and was successful in doing so. The team took a wonderful interview and enjoyed the interview session with him.

Here are a few snapshots from the interview: 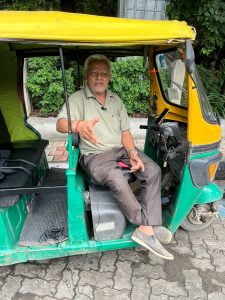 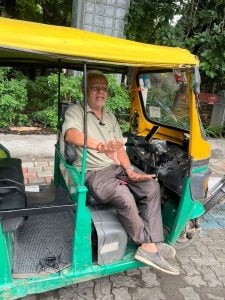