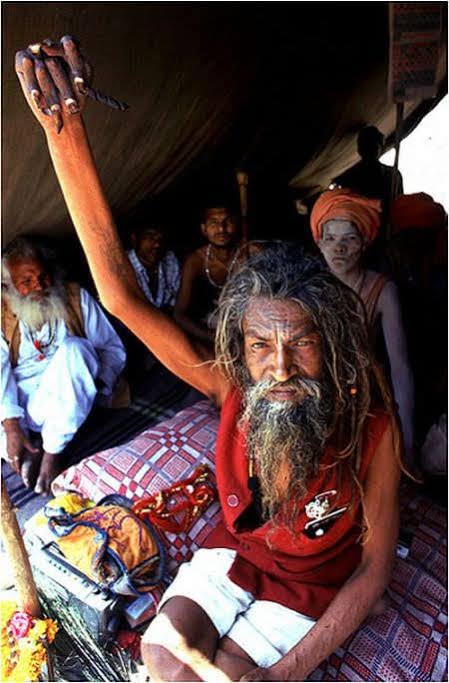 It might sound unbelievable to fathom it, but one Indian monk changed the way we perceive faith, and ourselves.

An aam aadmi like any of us, he worked hard to build his family, a wife, and three children. The 1970s wasn’t easy, every day was a new battle to stay afloat, to survive the great chaos of what mundane living is.

But one day, out of nowhere, he left.

A calling so strong, a longing so deep no physical bond could break it. And that was the birth of yogi Amar Bharati, who in deep devotion to lord Shiva, raised his right arm and never lowered it.

It wasn’t easy, well far from it. He remembers the first two years to be excruciating, along with an innate yearning to return back to the life he once lived. But he persisted until he felt his arm no more.

Even if he was to lower his hand down, he couldn’t. His arm muscles have been atrophied beyond repair. As far his fingers are concerned, they have been morphed into clawed remnants, a life of its own.

“If you try to lower Bharati’s hand you will cause him real pain, not physical but spiritual, for he believes that his eternal salute does indeed promote world peace,” one of his acquaintances explained.

It has been over 45 years since he lowered his right arm.

Some experts claim, owing to decades of atrophy, any movement, however small, would lead to him breaking his joints. So it’s better to let the arm be on its one, personifying the essence of human will.

As horrific as it would seem to a lay person, the answer is pretty simple. In a quest to attain enlightenment, his entire arm reshaped himself, into a new identity. Such are the marvels of our human bodies.

what does this gesture signify? people ask the humble sadhu. It is a gesture to mitigate world peace, the sadhu replies.

Indian sadhus do engage in ‘Tapas’ -practices requiring extreme diligence to achieve ‘Moksha’. The more it hurt, the closer he felt to divinity until the pain ceased to exist.

Every year, thousands of travelers pay a visit, to pay homage to the sadhu. You will find him at the Kumbh Melas, a giant sea of people exchanging a few days of their lives for penance and prayer. Some, inspired by his gesture, tried the imitate this insane discipline.

None could hold up to what the yogi could.

In a previous interview with the History of Yesterday news site, Bharati said, “I do not ask for much. Why are we fighting our sons among ourselves? Why is there so much hatred and enmity between us? I just want all Indians and the whole world to live in peace with each other.”

“By holding his arm in the air, he gains long life and other powers,” explained one disciple in an article in The Guardian.

Today he is celebrated worldwide. Not for what he did, but rather on the person he went on to become.: to raise not just our arms but ourselves to who we always wish to be.