Indian food has always been an attraction for anyone who is not from India.

Anybody unaware of Indian flavours tends to drool over Indian food.

Even though Indian food is difficult to make many of the street food options available in India are simple preparation, maintaining complexities inherent to Indian food.

Recently one such incident in Masterchef Australia had India’s attention.

In this episode, the judges of the show liked an Indian snack that we as desis enjoy.

While the snack is very routine for Indians it blew away the judges.

We are talking about – the humble Bhel Puri.

Contestant Sarah Todd made the puri in one of the rounds which required her to wrap things up fast. 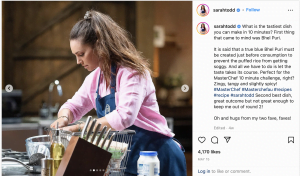 Everybody knows how tasty and scrumptious bhel puri is and it doesn’t require a lot of preparation time.

The Judges enjoyed the preparation saying “‘You packed such complex flavours into this and the raw onions were amazing and how did you manage to do this in 10 minutes!!!”

But as the bhelpuri is such a common staple snack here in India descriptions like these from the judges amused Indians.

Twitter has been on fire after this event where Indians are portraying various reactions about the same.

Some users also reminisced about previous such experiences on master chef talking about a standup bit by Karunesh Talwar which pointed out a similar anecdote.

Someone made Bhel Puri in Masterchef Australia and the judges were like—
‘You packed such complex flavours into this and the raw onions were amazing and how did you manage to do this in 10 minutes!!!’ 😂😂😂

And the bhel puri wale bhaiya will prepare it in 1 minute 😂😂 https://t.co/D5Wr7hmwga

😬🤣 #Bhelpuri
Ask @Iyervval to make it sound sexy like he did to pani puri. https://t.co/49kmw8Dtdw

😭😭😭💀💀 I might make millions selling Bhelpuri in Australia https://t.co/Q5XATWTt3p

While many have made fun of the whole situation some have did argue that bhelpuri isn’t as simple as it seems. it is an art and the description for the said dish is very well made.

This just goes to show if a thing is made very easily doesn’t mean that dish rates low on culinary skills or experiences.