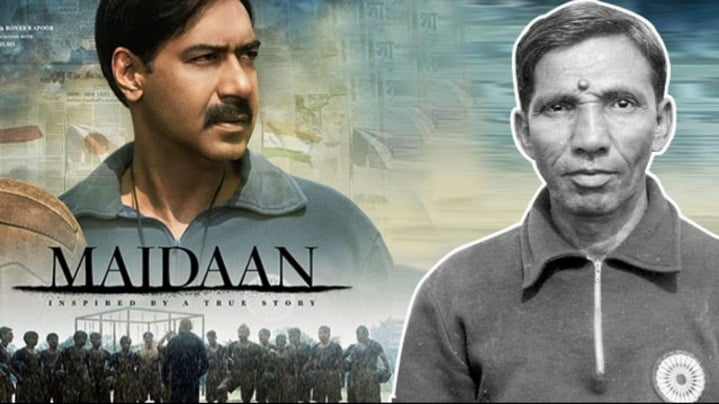 Maidaan is an upcoming Hindi film directed by Amit Ravindernath Sharma; expected to release on Dussehra, starring Ajay Devgn, Keerthy Suresh, Priyamani & Gajaraj Rao in lead roles. The movie had to change its date quite a few times due to several unprecedented circumstances.
The movie is based on the veteran football coach, Syed Abdul Rahim. This would definitely be a much-awaited movie for all the football fanatics out there, as it revolves around the golden era of Indian football.
Syed Abdul Rahim is regarded as the greatest football coach of all time. He kick-started his career as a school teacher. But always had an unfathomable love for football. Back in the days, he used to play for Hyderabad’s best local team- Qamar Club, from the 1920s to the 1940s.
Rahim was way ahead of his time, and this uniqueness set him apart from his counterparts. He had the ability to mold brilliant players. It was his perseverance and determination that led to the infrastructure advancement in Hyderabad. Also, there was a significant shift in the attitude of people towards the sport.
Prior to his coaching, Indian football players used to follow the British style of dribbling the ball. Later, when Rahim became the coach of Hyderabad City Police or City Afghans in 1943, he taught the concept of passing the ball. This helped to bolster the players’ speed, stamina, skills, and techniques.
Eventually, the team managed to become the best local team. And went on to win 5 times consecutively the Rovers cup.
He was quite tough when it came to the game, due to which he never hesitated to eliminate poor performers.
In 1950, he was appointed as the coach for the Indian National Football team. Alongside, he also managed the Hyderabad City Police team.
It was under his guidance that the Indian team won the first Asian Games. But he gained wider recognition after the second Asian Games in Jakarta in 1962. Even the hostile treatment towards the Indian team in Jakarta did not stop them from victory.
Unfortunately, a few months after the feat, he succumbed to cancer, and since then the Indian football team has plummeted.
A few months back, there was speculation when RRR and Maidaan were set to release on the same date. But later, reports stated that Rajamouli’s RRR had yet to complete its shooting.
Since the topic for discussion is biopics. We need to understand the repetitive pattern that is being followed in Bollywood for the past few years; a plethora of biopics have been churned out.
When it comes to biopics, it’s either a win or lose situation.
Even for actors, biopics are the easiest way to reboot their careers. Few examples are, Farhan Akhtar’s Bhaag Milkha Bhaag, Ranbir Kapoor’s Sanju, and Siddharth Malhotra’s recent blockbuster, Shershah.
Most of the time, the personalities are already known or celebrated, making it easier for the director to seep into the heart of the audience and emotionally connect with them.
Now, something to ponder is “Are we losing out on creativity in the run to mimic the lives of “real-life heroes”?