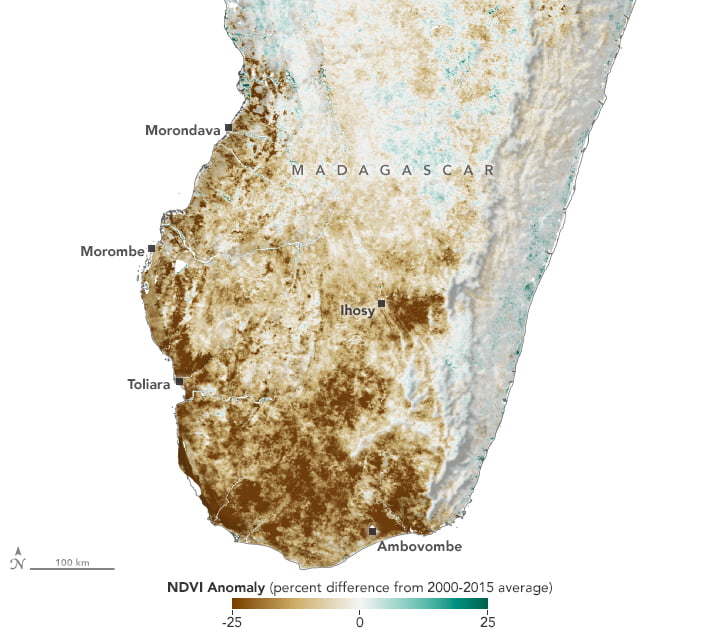 Madagascar could be the world’s first country to face famine induced by climate change. The south of Madagascar also known as the Grand Sud, is suffering from one of the worst droughts in the region in 40years, as reported by the UN.

The drought has devastated isolated farming communities, leaving families to scavenge for insects to survive. According to the UN News, Issa Sanogo, the UN Resident Coordinator in Madagascar said that in Betroka, an area known for its insecurity because of the presence of cattle rustlers has now faced with food insecurity due to drought resulting from low rainfall.

Further in south, in Madagascar, population is dealing with crop failures. There almost three million people are suffering the consequences of two consecutive extreme droughts. In the town of Ambasary Atsimo, about 75 per cent of the population is facing severe hunger and 14,000 people are on the brink of famine.

In the village of Marovato, people have been significantly affected by sandstorms and all of their croplands are silted up and now they cannot produce anything. As most of the areas in the south are in nutritional emergency, it is inevitable that women and children will be more affected.

According to the BBC, although Madagascar experiences frequent droughts and is often affected by the change in weather patterns, experts believe climate change can be directly linked to the current crisis. The latest IPCC report saw that Madagascar has observed an increase in aridity. That is expected to increase if climate change continues.

Chris Funk, director of the Climate Hazards Center at Santa Barbara University in California confirmed to BBC, the link with “warming in the atmosphere”. He said that the Madagascan authorities needed to work to improve water management.

He added, “There’s a lot that can be done in the short term. We can often forecast when there’s going to be above normal rains so that farmers can use that information to increase their crop production. We are not powerless in the face of climate change.”

The drought’s impact is being felt in larger towns too with many children forced to beg om the streets for food.

“Free Guy” is all set for release in India