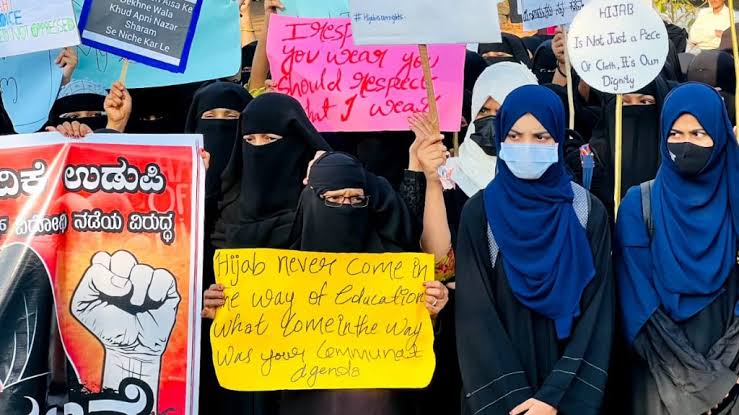 Karnataka’s Ameer-e-Shariat or Head Priest, Maulana Sagheer Ahmad Khan Rashadi, made a call for a state-wide bandh on Thursday and urged community members to follow it peacefully. They have called for this peaceful bandh to express their frustration and voice dissent against the Karnataka High Court’s ruling that wearing a hijab is not an essential religious practise in Islamic Faith.The decision was made during a meeting on Wednesday morning involving various organisations.
He urged Muslim youth and employees from all walks of life to join the bandh and show the government that it was possible to “follow our religion and get an education at the same time.”

“We urge all Muslims and like minded people to participate in the bandh on protest of the verdict which we believe against the soul of Indian Constitution,” said Maulana Sagheer Ahmed Rashadi.  He further appealed: “We urge people, especially youth not indulge in any anti-social activity and do not force anyone to close the shops.”

Speaking to the Economic Times, NA Haris, a Congress MLA from Shanthinagar, said that he attended a meeting in Bengaluru on Tuesday evening to address the issue, but the decision to organise a peaceful demonstration was made on Wednesday morning. He added, “The leaders have decided that officer-goers should not attend offices and shops and establishments owned by Muslims will stay shut. There is, of course, no force. They have asked for a voluntary participation.”

Yasir Hasan, state president of the Popular Front of India, confirmed his organization’s support for the bandh demand and urged people to participate peacefully.

The Karnataka High Court ruled on Tuesday that Muslim women’s wearing of hijab does not constitute an essential religious practise, and upheld the Karnataka government’s notification dated February 5, 2022, requiring students to wear only uniforms prescribed by the government or their respective school or college administrations.
A three-judge Bench of Chief Justice Ritu Raj Awasthi and Justices Krishna S Dixit and JM Khazi declared, “Hijab is not a part of essential religious practices of Islam and thus, is not protected under Article 25 of the Constitution,”

After the Karnataka High Court issued its judgment, a student, Niba Naaz, petitioned the Supreme Court, claiming that the judgement “failed to note that the right to wear a hijab comes under the ambit of ‘expression’ and is thus protected under Article 19(1)(a) of the Constitution.” In her petition, Naaz argued that the freedom to wear a hijab is also guaranteed by the right to conscience under Article 25 of the Constitution, which is an individual right, and that the High Court miscalculated in using the ‘Essential Religious Practices Test.’