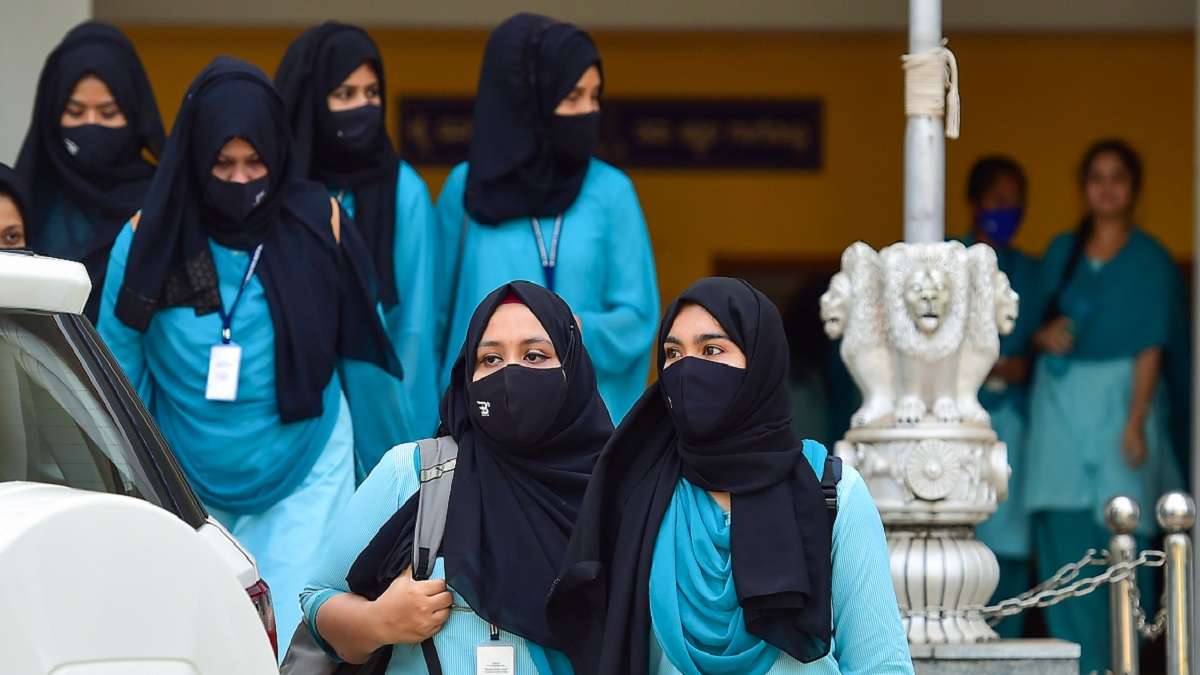 The Karnataka High Court upheld a ban on hijab in the classroom, with Chief Justice Ritu Raj Awasthi stating, “We are of the considered opinion that wearing of hijab by Muslim women does not form a part of essential religious practice.”
This decision might establish a precedent for the remainder of the country, which is home to more than 200 million Muslims, accounting for around 14 percent of India’s 1.35 billion citizens.
There is currently no national law or standard governing school uniforms, but the Karnataka verdict may force other states to adopt such rules.

Students like Afsana Piyaji, who were protesting for their right to wear a hijab inside their college, haven’t been inside their campus for over a month. “I came to the college thinking that there would be a solution…any solution,” she said. “We had just paid our semester exam fees of Rs 730. I thought the principal will help us finish this academic year.”

“We were told by our principal to go out and stop disturbing the others in the college,” Afsana added.

According to statistics available from the education department, Afsana is one of 232 degree students in Udupi who are reconsidering their academic future in the aftermath of the High Court ruling. According to the Udupi district Muslim Okkoota, a coalition of Muslim organisations in Udupi, at least 183 additional pre-university students are also missing their examinations. This represents 12.5 percent of the total number of Muslim females (1446) enrolled in Udupi’s pre-university colleges.

The imposition of a hijab ban has prompted parents and students in Udupi to even consider leaving their universities. In certain circumstances, families intend to relocate to a new location for educational reasons. Mohammed Ali, a parent of a BSc student at Mahatma Gandhi Memorial (MGM) Institution in Udupi, told The Wire, “We are thinking about moving to Mangaluru to help our daughter continue her studies in a college where the hijab is allowed.”

“I was scared to watch the TV on the day the judgment was announced (by the Karnataka High Court). But I was following our WhatsApp group and we were hoping that the hijab would be allowed in colleges like ours which previously had no issue with it,” his daughter added.

There are 58 college students who have contacted their college principal several times, demanding permission to write their exams. One of the students’ requests was to be able to write their examinations in a separate room. “We even agreed to take off the hijab if we were seated in a separate room and had a female teacher as the invigilator. This request was also denied,” she says.  “I cannot imagine going to class without the hijab. The hijab is mentioned in the Quran and I consider it a necessary part of our faith.”

Transferring to private universities where the hijab is permitted is not an option for students like Afsana, whose education might be jeopardised if the hijab ban is enforced. She expresses what is at stake for her by saying  “I won’t be able to afford the fees at private colleges, if I leave my current course.”

Similar situations exist at colleges throughout the area, including Kundapur and Baindur. Only one of the 56 Muslim girls at Kundapur’s RN Shetty Composite PU College showed up for exams last week. Similarly, just one of the 16 Muslim girls enrolled at the Baindur Government Pre-University College attended their courses.

On Friday, March 18, 231 Muslim students sat out their preliminary exams at the Government Pre-University College in Uppinangady in Dakshina Kannada after being told they would be barred from wearing the hijab. This includes boys who showed their support for Muslim girls.

According to the Muslim Okkoota in Udupi, which is tracking the number of students affected by the hijab ban, they have received requests for online classes from Muslim students in Uttara Kannada, Dakshina Kannada, Kodagu, Chikkamagaluru, and Shivamogga. “The epicenter is here in Udupi because this is where the issue began. But we have received requests for online classes from many other districts, including from all the neighboring districts, as well,” adds Okkoota member Hasan Maved.

“Since the verdict was announced, we have had 35 more students sign up for online lessons that we have arranged for pre-university and degree students. Every day we field around 5-10 calls from students and parents who are distressed about their future. This is a crisis for these families. They don’t know how their daughters will finish the current academic year,” Hasan adds.