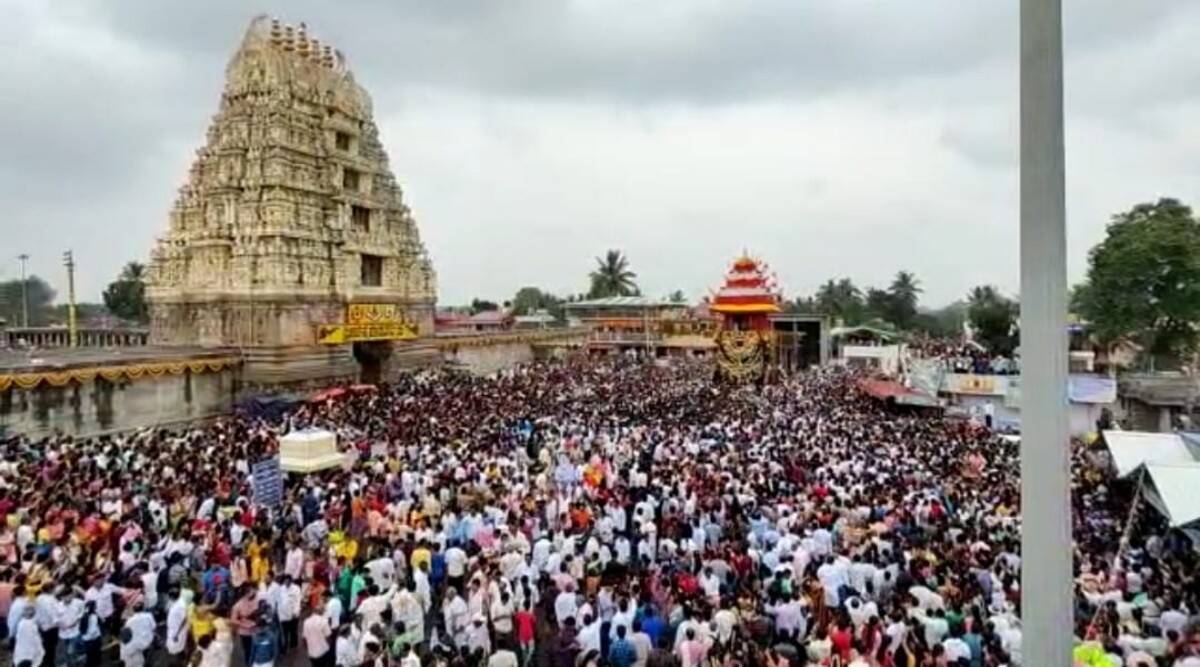 Despite objections from Hindu right-wing factions, the historic Chennakeshava temple in Belur, Karnataka, preserved its custom of ushering in the Rathotsava or Chariot Festival by reciting verses from the Quran on Wednesday.

The temple’s administrator had written to the Muzrai department, requesting clarity on the ritual’s continuance in the wake of the state’s recent turmoil. Rohini Sindhuri, the Commissioner of the Muzrai Department, gave the ritual the approval to continue.
According to Section 58 of the Hindu Religious Act of 2002, no interference in the temple’s ceremonies and customs is permitted. The temple committee decided to go forward with the procedure after she gave them permission.

In the midst of throngs of Hindu worshippers, Kazi Syed Sajeed Pasha read verses from the Quran in front of Lord Channakeshava’s chariot. The rite represents the region’s communal harmony.
At the Belur temple, the ‘Rathotsav’ celebration lasts two days. Channakeshava’s idol is adorned with gold and diamond jewellery bestowed to him by the ancient kings of the Mysuru kingdom.

Following a series of extreme communal tension in the state, Hindu organisations protested against the age-old practise of reciting the Quran as a part of the ceremony this year. Just recently, following threats from Hindu right-wing organisations, Muslim vendors were excluded from around 60 temple fairs in March, primarily in coastal Karnataka.

In Bengaluru, organisers of the annual Bengaluru Karaga procession said last week that they will continue to visit the Hazrat Tawakkal Mastan Dargah in Cottonpet, despite pressure from Hindu right-wing organisations who want the ritual to end. The Bengaluru Karaga is an annual celebration enjoyed mostly by the Thigala community in the city’s heartland.

After a two-year hiatus owing to the COVID-19 pandemic, the annual Bengaluru Karaga festival is back. This year’s celebration, which will take place at the Shri Dharmarayaswamy Temple in Thigalarpet from April 8 to 18, will be grander than ever before.

During the ceremony, a man dressed in a sari walks around Bengaluru’s old Pete districts, holding an earthen pot and a flower pyramid on his head. The procession includes a visit to a Dargah. It is stated that when the saint Hazrat Tawakkal Mastan was suffering from a physical condition over 200 years ago, he sought the blessings of the Karaga procession, and the Karaga was the one who cured him.

With inputs from The News Minute and IANS