Kattupalli Port Expansion: A Private Hearing of the Public Outcry 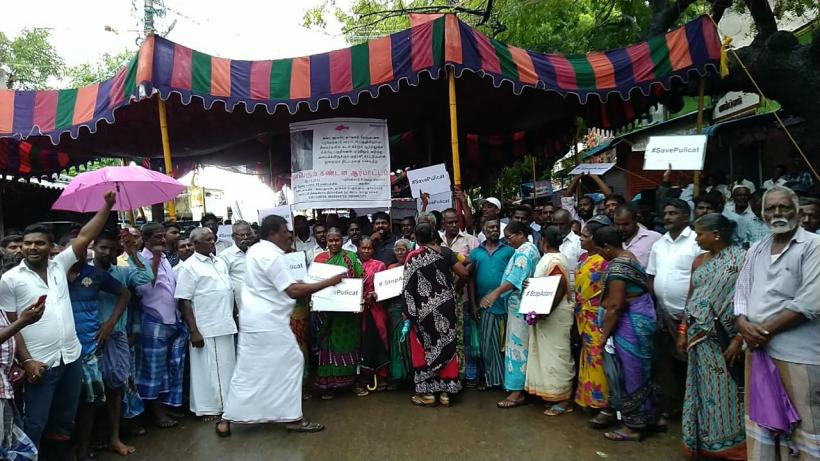 On 23rd of January 2020, the Madras High Court ordered a notice to Tamil Nadu Pollution Control Board (TNPCB) for holding a public hearing to obtain environment clearance for Kattupalli port expansion 20 km away from the proposed project site, resulting in thousands of stake-holders not able to participate in it.

The TNPCB had scheduled the public hearing at 11 am on January 22 at Bhagavaan Mahaveer Auditorium in Chandraprabhu Jain College in Minjur. Minjur, a town located in the outskirts of north Chennai is roughly 20kms from the Kattupalli project site. The plea pointed that, though 20 km might not appear long if one were to travel on highways and in cars, the villages are rural, with limited transport services and bad roads. The location choice of TNPCB then, arouses questions regarding the intentions of the said public hearing.

A Public Interest Litigation filed by P Ethiraj of Thirvallur before the Madras High Court cited the Environment Impact Assessment (EIA) notification which directs that such public hearings should be held at the project site or in its close proximity to ensure maximum attendance of people in the vicinity of the project. The petition also pointed that expecting thousands of people to travel to Minjur if they wish to participate in the public hearing is illegal and contrary to the mandate of the law.

The first bench comprising Chief Justice Sanjib Banerjee and Justice Senthilkumar Ramamoorthy, before whom the plea came, ordered the said notice of TNPCB returnable within two weeks. The case has been listed for further hearing on February 5.

The Kattupalli Shipyard cum Captive Port Complex is a large shipyard project at Kattupalli village near Ennore in Chennai, built by L&T Shipbuilding Ltd in 2012. In June 2018, Adani ports and special economic zone (APSEZ) acquired Kattupalli port from L&T and renamed it as Adani Kattupalli Port Private Limited (AKPPL). In March 2019, it was revealed that the Adani group, founded by Gautam Adani would be investing Rs. 53,031 crore into the Kattupalli port, to expand its existing capacity. Currently the total handling capacity of the port is 24.65 million tonnes per annum (MTPA) and it is proposed to be increased to 320 MTPA, which is one-third of the combined capacity of all ports in India.

In an article written by Nithyanand Jayaraman for The Wire, it is mentioned that, according to the EIA, the port is proposed to be expanded from its current area of 330 acres to 6,111 acres. Of this, 2,000 acres is to be created by dumping dredged sand into the sea. Additionally, 2,300 acres of commons – including springs, waterbodies, roads and grazing grounds – under public use is to be acquired. The remainder is private land. A conservatively estimated 2.000 acres of wetlands and water bodies will be landfilled to create space for a petrochemical industrial area. The project which is supposed to be completed in the next 20 years is said to provide direct employment to 1500 people and indirect employment to 4500.

Need for a public hearing

A three member sub-committee from the Ministry of Environment, Forest and Climate Change (MoEFCC) visited the project site in the June of 2019 and submitted a report in November of the same year. The sub-committee noted that Pulicat lake in the north of Kattupalli port, Ennore creek in the south with the Buckingham canal on the west are designated as ecologically sensitive areas and are placed under CRZ-1 (critical for maintaining ecosystem of coast) of Coastal Regulation Zone (CRZ) Notification, 2011. The committee also recommended a detailed study on the impact of the port expansion on the Ennore shoals that were protecting the coast from cyclones and tsunamis along with recording the concerns of local people, with regard to the protection of the wetland ecology.

The proposal kept forward by the Adani-owned Marine Infrastructure Developer Private Ltd. (MIDPL), will wipe out at least six named fishing grounds near the area. The destruction of beaches by port-induced erosion will rob the women of their livelihoods as boats will be forced to land their catch at faraway landing sites. Usage of various hazardous substances like butane, epichlorohydrin and acrylonitrile during the construction and running of the new port would presents scenarios where entire villages can be wiped out in minutes. A study conducted by the Institute of Ocean Management, Anna University, predicts that port construction will cause the Pulicat Lake’s shore to erode at 16 metres/year – almost double the existing rate. Adani’s proposal will close off 6 km of the beach up to Karungali estuary, which is one of the busiest Olive Ridley sea turtle nesting sites on the island. Increased shipping traffic will heighten the mortality of turtles moving to and from their nesting sites. From realignment of public roads to salinity intrusion to risk of flooding, the port project is cited as illegal and unnecessary.

While the submitted proposal has the potential to damage the people and ecosystem of the region, it has still managed to get past the Expert Appraisal Committee of the Ministry of Environment, Forests and Climate Change. Once the project is approved by the above mentioned committee, the next step is a public hearing in the presence of representatives of the state and the company. By organising the hearing 20km away from the project site, the TNPCB along with AKPPL has demonstrated little or zero value for a simple but crucial democratic process and the law of the land.

Public hearings ostensibly acts as a fact finding device, presumably to give the decision-maker information or ideas about public attitudes and reactions. In this scenario, the decision maker, namely the state is duty-bound to listen to the stakeholders. Public hearing becomes a mockery of democracy, when the public who will be affected by the project itself is unable to voice their concerns. On 5th, when the Madras High Court listens to the case, democratic right of the people of Kattupalli, Pulicat and adjoining areas will also be decided.

Union Budget 2021: What To Expect Tomorrow