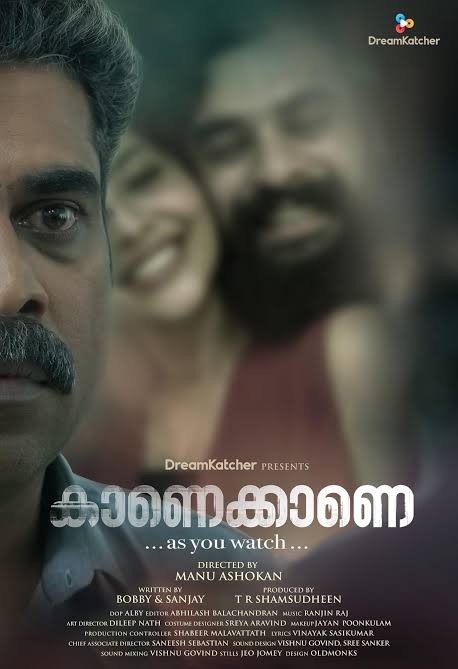 “Kaanekkaane”, a Malayalam drama-thriller written by Bobby-Sanjay and directed by Manu Ashokan, made a direct release through SonyLiv on September 17th, 2021.
The movie explores the complexity of human relationships and how the consequences of one’s actions always catch up with them.
The film was produced by T. R. Shamsudheen under the banner of DreamKatcher and stars Tovino Thomas, Suraj Venjaramoodu, Aishwarya Lekshmi, and Shruti Ramachandran in lead roles. The film opened up to mostly positive reviews from critics.
Suraj Venjaramoodu was highly appreciated for the performance he displayed and everyone has done their parts.

The movie revolves around Paul (Suraj Venjaramoodu), a government employee who is still trying to recover from the loss of his daughter Sherin (Shruti Ramachandran) in an accident that took place a year ago. The hit-and-run case is still being pursued in court. As he visits his son-in-law Alan (Tovino Thomas) who is presently married to Sneha (Aishwarya Lekshmi), he realizes that he’s been stuck in the past while everyone has moved on. But certain incidents and instincts arise doubts inside him about his daughter’s death, and the movie explores this further.

The ending seems comparatively tame and disappointing as the first half builds towards certain expectations about how the ending should be, which is not met. It may seem unrealistic as the second half seems to contribute to turning it into a happy ending or an all-is-forgiven kind of ending for all characters.

“Kaanekkaane” is Manu Ashokan’s second directorial after the success of his first movie “Uyare” which was also written by Bobby-Sanjay.
The movie explores the complexity of the human psyche and how one specific incident can be imprinted in one’s life forever, how the consequences can transform one’s life. With ample amounts of flashbacks to lay the foundation, and shift between the emotional moments of the characters, the film gives an emotionally gripping experience to the audience. The movie has a tagline “..as you watch..” which presses on the whole point of how someone is more than what meets the eye, and how they unravel themselves as you watch them.

The background score with high-pitched instruments that lingers in the scenes, perfectly tailored to fit into different emotions going through the movie is another major highlight of “Kaanekkaane”. There is only a single song in the movie, which is sung by Sithara Krishnakumar, and it has a male version rendered by G.Venugopal.