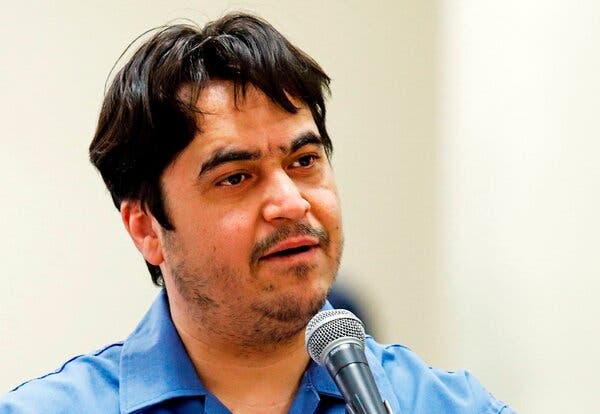 Iran’s once-exiled journalist, Ruhollah Zam, 47 was executed early on the morning for December 12 for his role in the nationwide anti-government protests of 2017 that raised havoc in Iran. Zam’s execution came four days after the Iran’s Supreme Court upheld his death sentence, despite facing extensive criticism. Earlier this year, a court sentenced Zam to death after he was found guilty of “corruption on earth”, a charge often invoked for cases that involve espionage or an attempt to overthrow the Iranian government.

Ruhollah Zam, son of a reformist Shiite cleric, Mohammad Ali Zam, used to serve in a government policy position in the 1980s. Ruhollah Zam was an Iranian activist journalist, who was famously known for running an online opposition news website, ‘AmadNews’, as well as a channel on Telegram, where he had over a million followers. In a letter published by local media in July 2017, his father said he did not support his son’s journalism and Telegram messages.

Ruhollah Zam’s website and Telegram feed played a crucial role in the anti-government protests that broke out across Iran in 2017 in response to the sudden jump in food prices, a flailing economy and the lack of opportunities for Iranian citizens. As per a report by the Indian Express, around 5,000 people were detained and as many as 25 were killed in the demonstrations that year. These protests become a huge challenge for Iranian President Hassan Rouhani and even Supreme Leader Ayatollah Ali Khamenei, since the pro-democracy Green Movement protests that Iran witnessed in 2009

The 2017 protests grew to become the biggest political challenge faced by Iranian President. Details about the protest and inflammatory content about Iran’s leadership was constantly shared on Zam’s Telegram feed. At one point, Telegram even shut down his channel after the Iranian government complained that the journalist was teaching his viewers to make petrol bombs. However, the channel was launched again, but under a new name. By this time, Zam already had a target on his back for challenging Iran’s Shia theocracy.

In October 2019, Iran’s Revolutionary Guards Corps announced that they had arrested Zam. However, details of his arrest were unclear, as he had been granted political asylum in France, and was living there ever since his imprisonment in Iran following a disputed presidential election in 2009.

Months after Zam’s mysterious arrest, he was found guilty of “corruption on Earth” and sentenced to death in July, this year. The crime of “spreading corruption on Earth” or “Mofsed fel-Arz” is a charge often wielded by the Islamic state against those who oppose it. Under the Iranian penal code, the punishment for crimes involving the violation of national security or spreading misinformation is a maximum of 10 years in prison. However, according to Article 286 of the country’s penal code, a person who spreads lies or violates national security at a “large scale” may face execution.

Earlier this week, the country’s Supreme Court upheld the death sentence. Zam had been accused of interfering with Iran’s economic system, destroying property, spying on behalf of French intelligence and conspiring with the US, Al Jazeera reported. Authorities alleged that the journalist was in close contact with the US’ National Security Agency (NSA) agents and a number of other foreign intelligence services.

“This individual committed criminal and corrupt acts against the security and livelihoods of the Iranian people through running the antagonist AmadNews Telegram channel and espionage communication with elements linked with foreign services that are against the Iranian people’s security,” an article in Mizan, the official news website of Iran’s judiciary, read.

A blow to the freedom of press

The freedom of press gives journalists the liberty of inform the masses about events, even if they go against the ruling government. Several activists across the globe have condemned Zam’s execution as it curbs the freedom of the press. According to ‘Reporters without Borders’, Iran has been “one of the world’s most repressive countries for journalists since the past 40 years.” At least 860 journalists have been arrested or executed in the Middle Eastern nation since 1979.