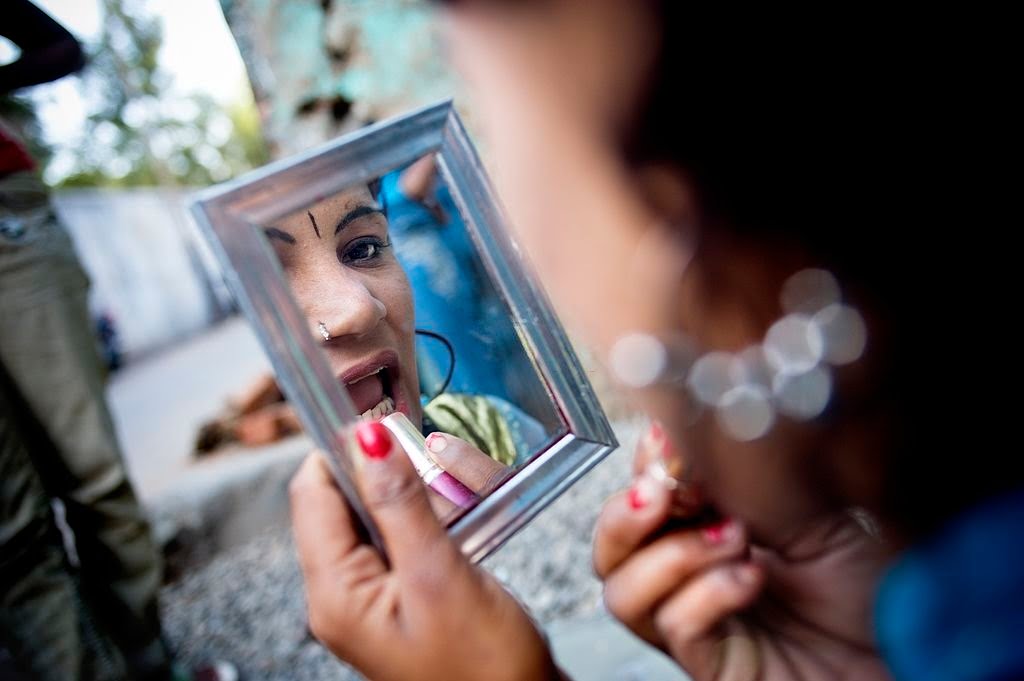 n a red-light district in the city of Nashik, a young female sex worker sits outside a brothel and makes herself up for another long and demanding working night.

The job of a sex worker or as we know it, Prostitution is considered legal in India. Though several exceptions as well as restrictions are there on it. Numerous arguments can be presented in this regard, but ultimately it depends on the constitution to legalize it or not. Prostitution is contemplated as one of the oldest professions in India which is going on for ages. According to the reports, most sex workers enter this territory at their young age of 18. If we go as per statistics, there are over 20 million sex workers in India. As studied in Indian mythology, a lot of characters or references have been given for sex workers. Some people even used to worship them and their art. But in recent times, the majority of sex work is conducted illegally, and to maintain the sovereignty of it, the Judicature of India has constituted some laws.

Laws to maintain legality of Prostitution

Starting with Article 23(1) of the Constitution which prohibits human trafficking and other such forms of forced labor. Article 23(2) declares that any violation of this provision shall be regarded as an illegal and punishable offense. Further, the State governs prostitution in India in the Immoral Traffic (Prevention) Act, 1956. It constitutionally differentiates between a sex worker and a person causing a nuisance. The principal objective of the act was to criminalize the wrongdoings amounting to prostitution. It also empowers the Central Government to establish a Special Court to try offenses under this Act. An amendment of the same was proposed in 2006 but has not been enforced yet. The amendment bill removes the provisions that penalize prostitution by soliciting clients. The bill recommends intensifying the punishment, and an increased fine amount. Such laws have defined the term “trafficking in persons” and made it a highly punishable offense. So, anyone found guilty i.e., trafficking in persons for prostitution, shall be punished under the law.

Laws for the protection of sex workers and their rights:

The first and foremost part is to highlight the general rights that apply to sex workers as well. Under this comes “The right to life expressed under Article 21” which is equally relevant to sex workers. If we look at the core point, the law actually fights with society’s mentality against sex workers. The mindset denies considering them as normal human beings. In this same regard, the basic law of “Right to life” includes the sex workers as well. It states them as human beings and a part of society, and that no one has a right to assault or murder them as they also have the right to live.

The Judicature thinks rightfully at the reason behind women’s need to indulge in prostitution. In most cases, women give themselves in such works because of their financial condition, which brings them into poverty. Understanding the circumstances behind such a decision to be a sex worker, the Central Government, and State Governments are directed to open rehabilitation centers. The centers will be placed that guides the women in technical and vocational skills like sewing so that they attain other means of livelihood.

Since the Judicature has directed the governments, there’s been an addition in the Immoral Traffic (Prevention) Act. The act has incorporated Section 21 as a rule for the State.

Governments to establish and maintain protection homes for the women who are indulged in prostitution. Further, it also clarifies that these protection homes should be regulated by licenses issued by the government, and an appropriate authority should be appointed for the same to follow. The government must give a good check on these shelters, as it is their job to maintain them properly and anything in regard with it under Section 23 of the Act.

All these laws are made to suppress prostitution in women and young girls and to provide them with purpose and a livelihood. This opportunity can act for them as a way of survival, that too with dignity. It helps the fallen victims to rise again to become decent members of society. As a part of a developing nation, we all must lend our hand for the same. We don’t need to do something that we are not capable of, but only an acceptance for all those women in our minds and heart. One thing that we must remember is, humanity can make all the difference in society.