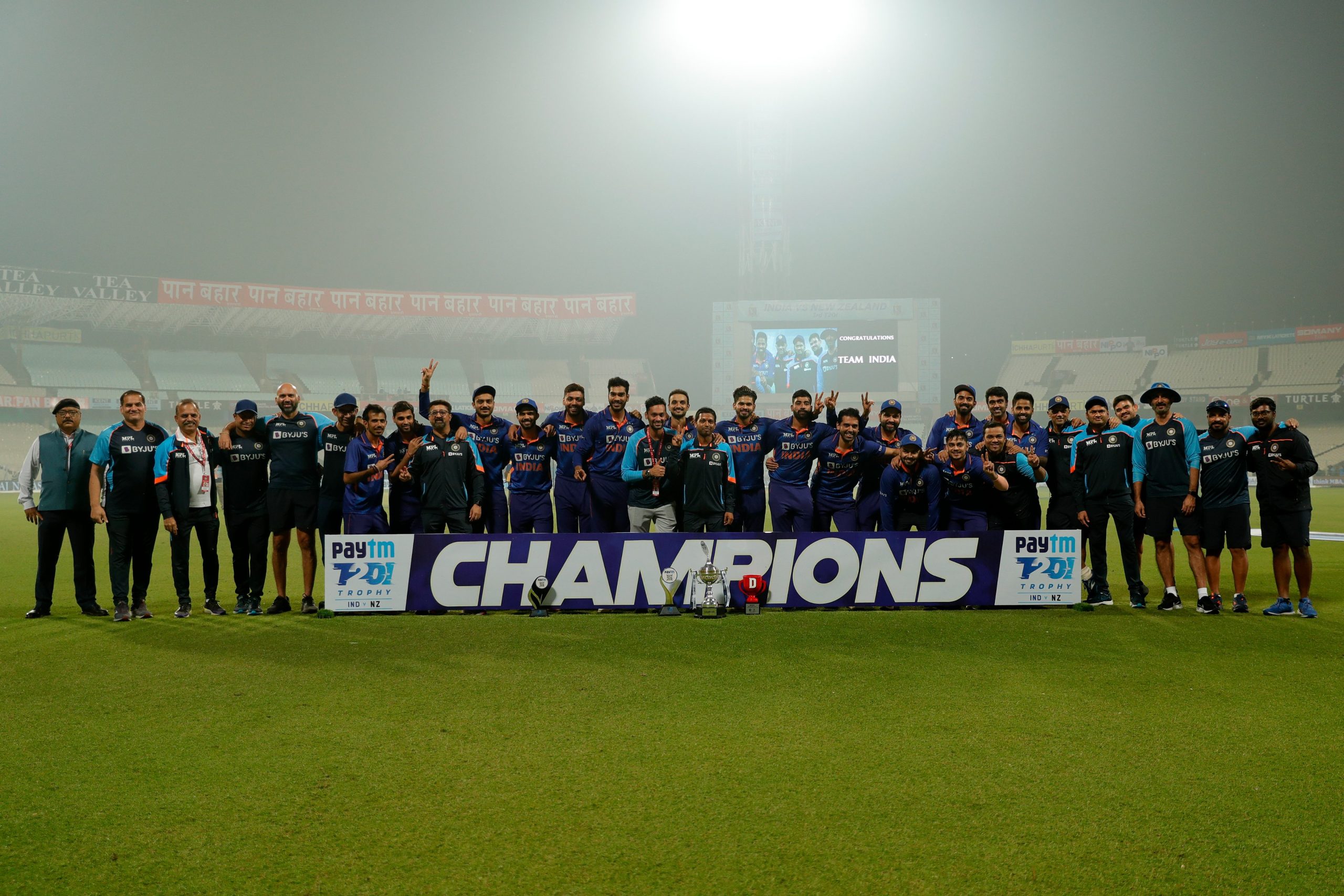 India crushed New Zealand by 73 runs to win the third T20I at Eden Gardens to win the three-match series by 3-0. The entire team turned up, for a complete team effort to clinically defeat the finalists of the World T20.

India crushed New Zealand by 73 runs to win the third T20I at Eden Gardens. The home team won the three-match series by 3-0. The entire line up turned up, for a complete team effort to clinically defeat the finalists of the World T20.

After winning the toss for the third consecutive time, Rohit Sharma elected to bat first. Setting up a total and defending it has been a challenge for the Men in Blue, especially in the shortest format of the game. It was also a major reason for India’s early exit from World T20, earlier this year.

Ishan Kishan and Yuzvendra Chahal came in for Kl Rahul and Ravi Ashwin, who were rested before the test matches. With the dew playing a crucial part and fast outfield, India dominated the powerplay overs, and scored with intent.

The newly paired opening partners gave India a dream start.  They scored at more than ten runs per over for the majority of Powerplay overs. Mitchell Santner, who was captaining New Zealand in the absence of senior pro -Tim Southee, brought himself into the attack right after the powerplay and chipped in important wickets.

India was in a comfortable position after the powerplay overs, however with the introduction of spin from both the ends, the team lost a bunch of wickets in quick succession. Rohit Sharma played well for his 56 off 31, though the Indian middle order failed to convert the start into substantial scores.

After losing Shreyas and Venkatesh Iyer in their 20s, India’s lower order helped the team with their fireworks in the death overs. Trent Boult was disciplined and economical in the fag end of the first innings. However, the valuable runs from Harshal Patel and Deepak Chahar made sure that India crossed the 180-run mark.

Chasing 185, New Zealand was off to a decent start in the first couple of overs. Experienced Martin Guptill continued to attack from his end without any solid support.

The introduction of Axar Patel in the third over got India their first wicket. New Zealand continued to lose wickets, as the left-arm spinner gave very less breathing space for the visitors. He virtually ended the game by taking the three wickets, in the first five overs.

Besides Martin Guptill, 51(36), no one showed promise from New Zealand’s batting lineup. They got bundled up for a mere 111 to allow the hosts to claim the series by 3-0.

One of the highlights of the game for India was Venkatesh Iyer’s bowling. The talented youngster got into the squad with the reputation of being a power hitter who can chip in a few overs with his medium pace.

He bowled for the first time in the series and got the wicket of Adam Milne. With his all-around abilities and India’s issues with the 6th bowler, it will be interesting to see how India uses the southpaw in the matches to come.