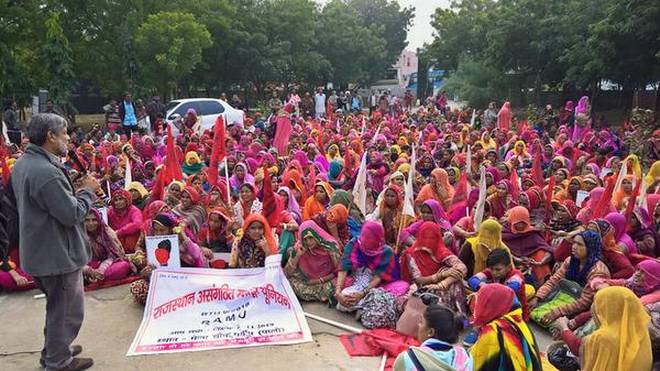 In 2020, the world was at distress due to the emergence of a new virus Covid-19, it is an infectious disease and it has been spreading at a very fast rate. During this time in order to control the spread of the virus Prime Minister Narendra Modi declared a nationwide lockdown and all offices, schools, colleges, were closed. In this time the people who suffered the most were the daily wager, laborers, migrant workers, etc. Globalization has created more migrant workers than ever before, unemployment and increasing poverty has encouraged many workers to seek work elsewhere. In industrialized countries demand for labour has increased. Due to the lockdown migrant workers were stuck in other cities or states away from their home and had no way of coming back as the transportation was completely shut down due to lockdown. From mortgaging their land to live in the cities to walking thousands of kilometers to reach home they have done everything but the lack of execution of the labour laws that were meant to uphold their future have provoked the difficulties. There are approximately 454 million migrants in the country; 60 million of them are interstate labour migrants. Despite of their contribution in the India’s GDP there are no inclusive data on migrant workers and they are socially and politically vulnerable.

States like Madhya Pradesh, Uttar Pradesh, Bihar, Odisha, Rajasthan, and Jharkhand received maximum number of migrants back, and this scheme will help speed up the implementation of 25 public works and those related to increase the opportunities. The works related to the scheme are rural housing for the poor, provision of drinking water through “Jal Jeevan Mission”, plantations, construction of panchayat bhavan, rural roads and mandis, cattle shed, anganwadi bhavan, community toilets according to the Ministry of Rural Development. Under this scheme, The variety of work will ensure that every migrant gets an opportunity to work according to their skills in 125 days. The Garib Kalyan Rozgar Abhiyaan was launched by PM Modi through video conference in a village in Khagaria district of Bihar in the presence of the chief ministers of five states — Bihar, Uttar Pradesh, Rajasthan, Madhya Pradesh, Jharkhand — and a minister from Odisha.

The Protest of the Workers:

On 18th March 2020 a group of hawkers, domestic workers, laborers, sex workers and other unorganized workers gathered at the Jantar Mantar in Delhi after almost a year passed of the announcement made by Prime Minister Narendra Modi about the nationwide lockdown to reduce the rate of Covid-19 cases in India which had put the migrant workers in a crisis situation and now they are demanding for the promise that was made to them during the pandemic to be fulfilled. According to Kusum of the All-India Network of Sex Workers who was present at the protest arranged by the Working People’s Charter said “Sex workers had no resources to survive the lockdown as they live on daily earnings. The government sent food to schools, but they didn’t see that workers lived several kilometers away. As long as we are dying of hunger, there is no Atmanirbhar Bharat. How can I say my country is great?” She also said “Migrant workers were unable to access many of the government’s schemes for lack of documents. She demanded a one-time income support of Rs 10,000 for all unorganized workers”.  A resident of the homeless shelter near Bangla Sahib Gurdwara in Delhi Pushpa Devi, said workers want their right and dignity. She also stated that “when the lockdown was announced, we were treated like animals. The food we were given made us fall ill”. A resident of Muzaffarnagar Nitin Kumar who is a labourer in Haridwar stated that others from his village were also left with no income in 2020 as their employer refused to pay them the pending money because of the lockdown. In the early days of the pandemic he along with other migrant workers made their way to Rajpura where they worked as a bound labour and lifted brick in the brick unit and after four and a half months a NGO came and rescued them. He also said “We were forced to take loans to survive. We would only get Rs 1000 every 25 days from the employer. But, we had no choice, as we could not find any other work. When we left, I was owed at least Rs 25,000”.

National coordinator of the Working People Charter Chandan Kumar said that the condition of the workers was “alarming”. A draft policy for the migrant workers had been made by the NITI Aayog, though it is yet to be notified and implemented. He also said that the centre must allot funds to execute the policy. The general secretary Bandhura Mukti Morcha Nirmal Agni said that if the government failed to implement the policy then the workers will gather together on the eve of the lockdown anniversary which is on 23rd March and protest. A letter was sent to the Labour Minister Santosh Kumar Gangwar and to the Delhi Chief Minister Arvind Kejriwal demanding the completion of the migrant workers policy, domestic work, end to eviction from slums, acknowledgment of sex work, construction of workers, registration of all migrant workers, and hostels in all districts.

Due to this scheme and the lack of fulfillment of the promise made by the government, the migrant workers have lost their faith from the government. If their demands are not fulfilled they will continue to protest, now it is up to the government if they will listen to these demands or will they come up with some new plan for the migrant. Only time will tell about the future of the workers.