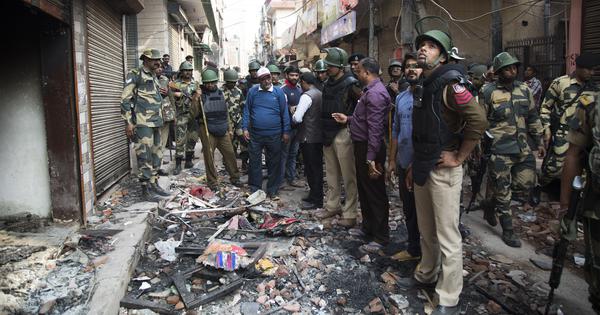 Violence erupted in Delhi’s Jahangirpuri on Saturday after members of the Hindu and Muslim communities clashed during a Hanuman Jayanti procession, according to ANI. Twenty people were arrested. In connection with the case, two minors were also arrested. One of the suspects was said to have opened fire.

Usha Rangnani, the Deputy Commissioner of Police for the North East, confirmed the arrests and said nine persons were hurt, including eight police officers and one civilian. “One sub-inspector sustained a bullet injury,” Rangnani stated . His condition is stable,” she added.

According to Bar and Bench, the police said in the FIR that four or five people began arguing with procession participants when the procession came to a halt near a mosque. As a result, both sides began throwing stones, resulting in a frenzy.

The police intervened and separated both groups, according to the FIR, but minutes later they began throwing stones and chanting slogans again. The site’s police officer then requested additional security, which arrived and used roughly 40-50 tear gas grenades to bring the situation under control.

As per the FIR, the police alleged that several people throwing stones and shooting guns caused the communal rioting. The crowd set fire to a scooter and a few other vehicles.

According to NDTV, police commissioner Rakesh Asthana said that the situation was being monitored and that two companies of the Rapid Action Force had been deployed in and near Jahangirpuri.

In today's incident in NW District, the situation is under control. Adequate additional force has been deployed in Jahangirpuri & other sensitive areas. Senior officers have been asked to remain in field and closely supervise the law & order situation & undertake patrolling. 1/2

According to a witness named Mastan, participants in the procession shouted slogans like “Bharat mein rehna hoga toh Jai Shri Ram kehna hoga [if you want to live in India, you must chant Deity Ram’s name]”.

He added that some persons waving saffron flags attempted to enter a mosque. He further claimed that the violence grew as a result of a lack of police presence in the neighbourhood.

A resident of the area, Wasim Qureshi, posted a video on Twitter of men in saffron robes participating in the Shobha Yatra march brandishing weapons in the air and waving swords. “Hindus and Muslims live in peace in this area. All of these people were outsiders” he stated.

Wasim Qureshi, a resident shared this video and pointed at the swords in the hands of those who were part of Shobha Yatra procession. "Hindus and Muslims live in peace in this area. All these people were outsiders," he said. pic.twitter.com/NEgi209yxI

Meanwhile, Union Home Minister Amit Shah has asked Asthana and the Special Commissioner of Police (Law and Order) for the Delhi Police, Dependra Pathak, to take appropriate measures and manage the situation delicately.