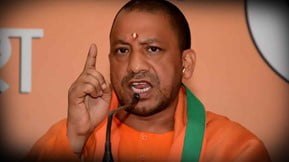 When it comes to stirring controversy one can always bet upon Yogi Adityanath, the dynamic and young CM of Uttar Pradesh. From love jihad to ghar wapsi, he is no stranger to controversy. News Hamster lists 10 of his most controversial remarks:

Minorities: During one of his campaign speeches, Yogi Adityanath said “ There have been 450 cases of riots in West UP in two-and-a-half years of Samajwadi Party rule because the population of a particular community is rising manifold. Why are there no riots in Eastern UP? You can easily understand. In places where there are 10-20% minority population, stray communal incidents take place. Where there are 20-35% of them, serious communal riots take place and where they are more than 35%, there is no place for non-muslims.”

Conversion: Yogi faced severe backlash from media and the public when he accepted that he converted 1800 Christians to Hinduism in 2005 during one of his interviews with journalist Rajat Sharma.

Yoga: When some people questioned the imposition of yoga on minorities and related it to Hinduism, exasperated Yogi made a remark in which he said “Lord Shankar was the biggest Yogi who started Yoga. Mahadev lives in every particle of this country. So those who want to avoid Yoga and Lord Shankar, can leave Hindustan.”

Mother Teresa: Renowned for his hatred against the Christian missionaries, yogi once claimed that Mother Teresa was part of the conspiracy to Christianize India. “Hindus were converted in the name of doing service,” he further added.

Secularism: A sharp critique of ‘party-political’ secularism, Yogi during his parliament speech on 13 August 2014 said “You (non-BJP parties) claim you are secular but the agenda you implement is communal…there are 12 lakh Hindu saints in the country, but you talk about giving salaries to imams. Is this secularism?”

Love jihad: We will not tolerate harassment of Hindus in the state at any cost…If anybody tries to touch Hindus in eastern UP, he will have to face the consequences.

Hindu ‘exodus’: At Shahibad on January 30, 2017, while speaking about the ‘exodus’ of Hindus, Yogi said “When I look at western UP, I have regrets…On January 19, 1990, Hindus had to migrate collectively from Kashmir. A massacre took place. If we have seen a sight similar to this anywhere, it was either in Bengal or western UP. Kairana and Kandhla are examples.”