Here is why Jerusalem is considered to be so sacred 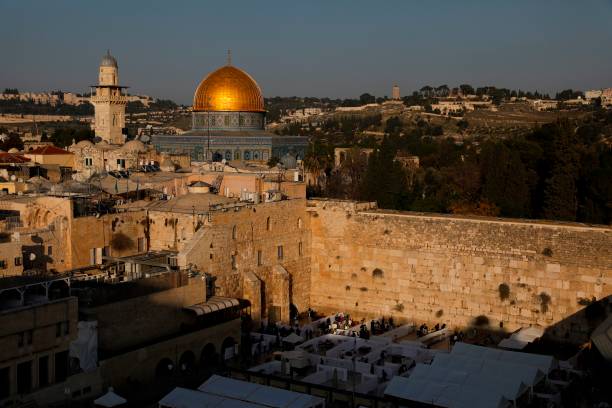 Jerusalem has been on edge for the past few weeks. Tensions have been increasing in the city. And in Jerusalem, tension, coupled with the absence of any light on the political horizon, tends to escalate into violence. The usually quiet residential neighborhood of Sheikh Jarrah in East Jerusalem is in turmoil. The residential streets around the city are regularly transformed into a battleground.

To note that, political control over Jerusalem is hotly contested because of the city’s religious significance. It’s home to major Jewish, Muslim, Christian, and Armenian landmarks. The old city also includes the holiest ground in Judaism, the third-holiest shrine in Islam, and major Christian sites linked to the life of Jesus.

However, the holy city has been built and destroyed numerous times throughout its 6,000-year history. But over the centuries, though, it was far from being the monotheistic bastion it is today.

The core of this city consists of a maze of alleyways along with a historic architecture that housed four quarters for Muslims, Christians, Jewish, Armenians respectively.

According to Jewish belief, King David seized the city in 1000BC and declared it the capital of his kingdom, bringing the 12 constantly feuding Jewish tribes under one authority for the first time. When David’s son Solomon built a temple here to serve as the principal place of worship, he transformed the city from a political to a spiritual center.

Following Solomon’s death, the Jewish kingdom split. Israel’s northern kingdom was wealthier and more sophisticated, with its own temple. Jerusalem became the Jews’ only center during the time of King Josiah (649-609BC.The Temple Mount was declared as God’s dwelling place on earth.

For many Christians, Jerusalem is also significant as it is the city where Jesus Christ preached, was crucified, and was buried. During the Middle Ages, Crusades were fought to reclaim the Holy Land, and the city is still a Christian pilgrimage center today.

According to Quran Jerusalem was also the last place the Prophet Muhammad visited before ascending to the heavens and conversing with God in the seventh century.

Let’s take a closer look at why it’s so significant to all three religions.

The Old City of Jerusalem is currently divided into the following four neighbourhoods, called quarters:

In Hebrew, Jerusalem is referred to as Yerushalayim, while in Arabic, it is known as al-Quds. The Temple Mount known in Hebrew as Har Habayit is considered the holiest site in Judaism. This is the place of Abraham’s son Isaac’s sacrificial offering, according to Jews. As per Jewish legend, Abraham went to sacrifice his son Isaac to prove his religion and faith to God, after which a sheep descended from above and his son was rescued. The first and second Temples are also located on this site. Previously, numerous Jewish prophets preached here. Jews believe that the Holy of Holies is located in the Dome of the Rock. The Jewish Quarter is home to the Kotel, or the Western Wall, a remnant of the retaining wall of the mount on which the Holy Temple once stood and The Western Wall is regarded as the most convenient location for Jews to pray to the Holy of Holies.

The United Nations Educational, Scientific and Cultural Organization, UNESCO, has classified the Old City of Jerusalem and its walls as a World Heritage Site, meaning it is regarded as “being of outstanding international importance and therefore as deserving special protection.”

It is important to Muslims for many reasons. First and foremost, Jerusalem was Islam’s first direction of prayer (qibla), before this was changed to Mecca. The Muslim Quarter in Jerusalem is the largest of the four quarters, comprising both the Dome of Rock shrine and the Al Aqsa mosque. The mosque is mentioned in the Quran and is tied to the account of Prophet Muhammad’s “night journey” from Mecca to Jerusalem – which establishes him as the last and most authoritative of the prophets. According to traditional interpretations of the Quran and other texts, it is also the location where the prophet Muhammad ascended to heaven.  A few steps away from the mosque is the shrine of the Dome of the Rock holds the foundation stone, where Prophet Muhammad ascended to heaven. Muslim shrines have existed in Jerusalem for over 1,300 years. The history of the mosque can be traced back to the seventh century. It was constructed for the first time in 637 AD, only five years after the prophet’s death. It’s been demolished, rebuilt, and remodelled several times. Since 1967, for many Muslims, Jerusalem has served as a symbol of resistance to Israel’s invasion of their lands.

It is a sacred place for Christians too. As soon you step into any Roman Catholic church, the pictures on the walls of the church transports you to Jerusalem. Since the Roman emperor Constantine converted to the modern faith of Christianity, Jerusalem has become a major pilgrimage spot. In the year 335 A.D, the Church of the Holy Sepulchre was constructed. It is regarded by Christians to be the location where Jesus was crucified and thereafter resurrected. The Church is located in the Christian quarter of Jerusalem.

Here is why Armenians have a quarter in the Old City of Jerusalem along with Christians, Muslims, and Jews.

Armenians have had a strong presence in the city since at least the fourth century. Their quarter is said to be the oldest living Armenia diaspora community. Thousands of displaced survivors of the Armenian Genocide relocated to this part of Jerusalem in the 20th century. Because of the genocide, Armenians were displaced from the old Ottoman Empire, they carried a distinctive type of Turkish-style porcelain with them, which has since been associated with Jerusalem and Armenians. Armenians have contributed to the city through the years. They founded the first printing press in 1833, the first photographic workshop in 1855, and the first coeducational school in Jerusalem with their Holy Translators’ School.

Humanity can defeat the pandemic. Here’s how people helped each other during the Global Pandemic.