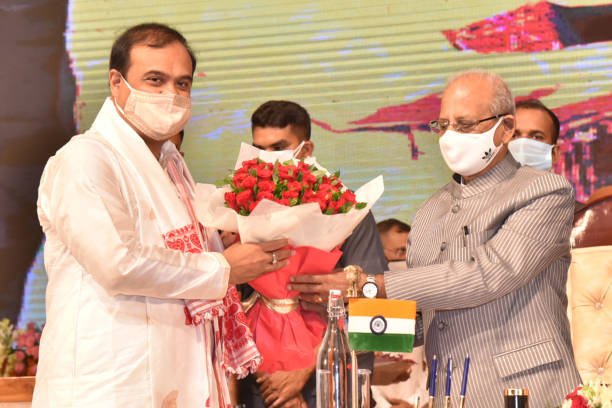 It seemed obvious a few months before the Assam Assembly elections that the BJP would run under Sonowal’s leadership, as the BJP’s strategy of projecting the leader had proven to be effective.

The decision is surprising given that Sonowal was not a controversial chief minister like Uttarakhand’s Trivendra Singh Rawat, who was replaced recently, or any other BJP chief minister who has stayed in office even after facing widespread opposition.

Dr. Sarma, on the other hand, stirred controversy during the elections and the Election Commission banned him from running after threatening Bodoland People’s front chief Hagrama Mohilary. After this incident, Dr. Sarma offered an official apology and hence the election body reduced his suspension from 48 hours to 24 hours.

Furthermore, Dr. Sarma even rendered inaccurate statements about the coronavirus pandemic, which were against the guidelines. So then why did BJP choose Himanta Biswa Sarma as the chief minister of Assam?

Here is the catch, the BJP was very well aware of Dr. Sarma’s desire to be in power. Though still a member of the Congress and serving as CM Tarun Gogoi’s right-hand man, he is said to have expressed interest in becoming Chief Minister in 2014. He left the Congress party in 2015 after his aspirations in the party were derailed, with Gogoi reportedly trying to promote his son Gaurav.

Sarma had also excellently managed the Congress’ 2006 campaign, and it was for this tactical acumen that he was once one of Gogoi’s most trusted allies.

If the BJP’s high command had allowed Sonowal to remain on as chief minister, it may have caused an internal brawl in the Assam unit, which Modi-Shah cannot afford after the massive defeat in West Bengal.

As a result, the BJP’s central leaders realized that if Dr. Sarma did not become the state’s chief minister, he would split the party. As convener of the North East Democratic Alliance, Dr. Sarma had the power to injure the party in other north-eastern states as well. The BJP couldn’t afford to ignore Sarma any longer, as they couldn’t risk losing Assam.

Much of this came at a time when Prime Minister Narendra Modi and Home Minister Amit Shah were under scrutiny for their handling of the Coronavirus second wave as well as their underwhelming results in West Bengal, which was also one of the factors to choose Himanta Biswa Sarma as the chief minister of Assam.

In Assam’s political outlets, Sarma was widely regarded as the BJP’s true driving force. The state and national media tended to exaggerate his significance while downplaying that of Sonowal. Sarma’s wife, on the other hand, owns News Live, an Assamese news channel that also paved the way in building his public image.

Sarma was a health minister in the former Sonowal government and was elected to the Jalukbari assembly seat for the fifth time since 2001. He was praised as the health minister for his control of the coronavirus outbreak during the first wave.

Sarma was also credited with devising a host of populist schemes, including the ‘Orundoi’ initiative for low-income families, the ‘Arunduti’ scheme for women’s welfare, the provision of free two-wheelers to girls, free admissions for underprivileged kids, and financial assistance for pregnant women. A multitude of factors, including these schemes, contributed to the BJP’s victory in the Assam.

It’s also worth noting that neither Dr.Sarma Sarma nor Sonawala have an RSS background. But Dr. Sarma, on the other hand, has been more active in appeasing the Hindutva lobby politically.

Himanta Sarma proved his potential in the 2019 Lok Sabha polls when he led the BJP’s campaign to alleviate public fears regarding the National Register of Citizens (NRC), and it was Himanta Sarma who helped the BJP avoid a difficult situation over the anti-CAA protest in recent months.

As a result, by choosing Sarma as Assam’s chief minister, the BJP would be relying on Sarma’s political influence to maintain power in the state.

According to analysts, the BJP would have preferred a low-profile chief minister with an RSS background or a long association with the party, such as Mangaldoi MP Dilip Saikia, Tirath Singh Rawat, and Pramod Sawant. However, BJP acknowledged the fact that Assam wasn’t ready for their organizational leadership. Henceforth choosing Dr. Sarma as the next chief minister would be beneficial for the party.

On a national level, the change in leadership in Assam raises a larger question: if Sarma did indeed manipulate the BJP high command into making him Chief minister, does this mean that the party at the Centre has begun to dwindle? If this pattern continues, the Indian government will face long-term repercussions.

Soul: “Is All This Living Really Worth Dying For?”