In 2017, a woman was devasted when she saw her daughter after giving birth to her. The baby was born with Harlequin Ichthyosis, a rare genetic disease. The deformed baby was born with a genetic condition where the skin has a layer of hardened shell and malformed features.

The newborn girl was born in a government-run hospital in the Patna district of Bihar, in eastern India, to a 28-year-old lady who would not provide her name. 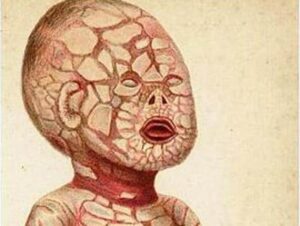 Numerous locals went to the hospital to see the “bizarre”-looking girl shortly after the word of her birth spread. Doctors were forced to step in to clear the crowds of people gathered outside the medical facility to witness the infant.

The young parents claimed they were traumatized by the birth of their daughter and referred to the infant as a curse. The mother wouldn’t hold the child in her arms or nurse the child when they first brought her home.

The mother told reporters, “Me and family are completely devastated. I am in shock as I was really looking forward to becoming a mother of a healthy child, be it a girl or a boy.” She further told the reporters that she did not how it occurred.

Since none of the girl’s organs have fully formed, doctors predicted that she wouldn’t live very long because the likelihood of survival in such circumstances is only one in ten million. A severe instance of starvation results in thickening skin and facial malformations, leading to the rare hereditary disorder known as Harlequin Ichthyosis.

It could be possible to diagnose such patients through prenatal testing. The ABCA12 gene can be checked for mutations using fetal DNA. Additionally, beginning in the second trimester, some of the characteristics of harlequin ichthyosis may be visible on ultrasound. 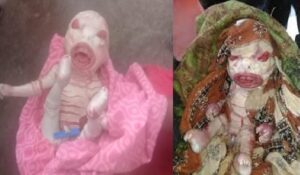 In 2016, a private hospital in Nagpur, Maharashtra, reported the country’s first case of a newborn born with harlequin ichthyosis. These incidents were also reported in Odisha, West Bengal, Bihar, and Delhi. Days after birth, according to accounts, the infants were unable to survive for long before passing away from the illness.

Over several weeks, the thick, plate-like skin of ichthyosis of the harlequin variety will gradually crack and peel off. At this time, antibiotic therapy may be required to ward off infection. Oral acitretin administration may hasten the shedding of the thick scales. The majority of harlequin babies require one-on-one nursing care during their first few weeks of life.

According to research, the illness only affects one in 30,000 newborns. Such infants have relatively moderate survival rates, at roughly 50%.

The baby born in Ratlam’s Civil hospital in Madhya Pradesh was called a collodion baby (CB). It means a newborn whose entire body is covered with an adherent, supple, parchment-like membrane.

Spreading knowledge Harlequin Ichthyosis will help reduce the stigma and support companies and governments investing in research to help people with this disease live entirely in everyday life.

References: The NewsHamster and The Mirror

In this article:#AlienBaby, #FactCheck, Harlequin Ichthyosis