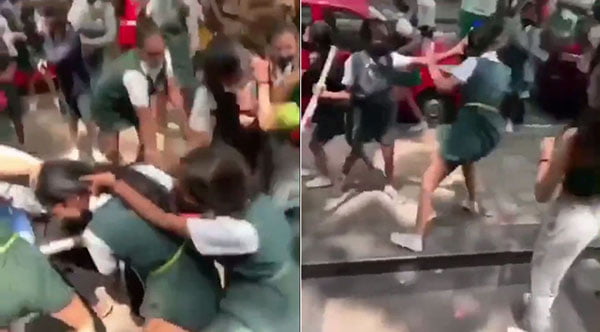 In a video that has gone viral on social media, students from the elite Bishop Cotton Girls’ School were found to be pulling each other’s hair, throwing punches, abusing, and assaulting. The incident occurred near Vittal Mallya Road. While most of the girls were seen in school uniforms, a few were in casual attire. Netizens were left in awe and many even made memes about the incident. It is believed to have occurred over a soured love triangle. According to police, the two girls, one from Bishop Cotton Girls’ School and another from a nearby institution were dating a boy from Bishop Cotton Boys’ School. A group of boys from the boys’ school had also arrived at the scene. Rumors have spread on social media that the girls were in love with a boy named ‘Yogesh’.

The Bishop Cotton Girls’ school management counseled the students who were involved in the fight. In the interest of students and under The Protection of Children from Sexual Offences Act, the school administrations, the Right to Education Task Force, and the police have called on the students and their parents for peaceful mediation of the dispute.

Calling it a small and irrelevant matter, Nagasimha G Rao, child rights activist, said, “Schools and parents should be sensitive when handling children at this age. This is why we insist on Child Protection Policy in every school and the need to create awareness about the Pocso and the JJ Act. They should be aware of the consequences of violent behavior.”

Sujatha Suresh, a member of, the RTE Task Force, said, “We have educated both children and parents and advised them not to make it an issue in the interest of the students and in an effort to protect their rights.” She added that adolescence is an important period of a child’s social and emotional development, and adolescents were clearly affected by the pandemic. She advised parents to be friendly with their children and openly communicate with them.