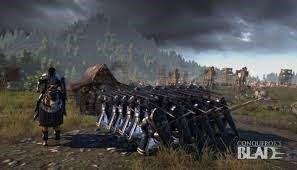 #Conqueror’sBlade is a slick combination of Real Time Strategy and Action-RPG that starts you off with a quality character creator. It’s no Black Desert Online, but there are more than enough options here to get something you’ll be satisfied with. Once you’ve made your character you’re plunged into a tutorial hub world where you’ll begin a gauntlet of tutorial missions that will help you understand the basics of controlling your character and entering battles.

Visually, #Conqueror’sBlade looks great, the game has a cool pseudo-realistic medieval aesthetic. Even low level Armor looks decent so you won’t feel like a complete chump as you race to catch up to higher level players. The game also supports 4K resolution, so if you’ve got a video card that can support it, you’ll really want to make sure you set it to that for maximum effect.

From a gameplay perspective, Conqueror’s Blade is a ton of fun. Charing around the battlefield and wiping out units feels a lot like a simplified Dynasty Warriors game. Attacks are bound to left click and hot keys, and each click of the mouse is an individual swing of your chosen weapon type.

The character skill tree is also variant and open and need not require a full reset which makes it more approachable to play.

Coming to battles I can say that #bloominggamesstudios has done an excellent job of combining AI and user experience where you are in control but the controls are not too complicated like mount and blade and you only have to control 1 unit.

What makes Conqueror’s Blade stand out is that you can craft or unlock items to take into battles with you to give your team an edge. These can be anything from siege weapons to extra artillery in the form of cannons and trebuchets. These items take time to set up and use, and your positioning will be crucial to their success, but they can quickly turn the tide of a battle when they’re used effectively.

There are more than just capture points to worry about controlling during battles like Replacing units when they’ve been wiped out requires that your team control a Supply point. Controlling one of these valuable objectives also allows you to heal up your units between skirmishes to better your chances of taking or holding an objective. Choosing when to resupply and when to go on the offensive is another key dynamic you’ll have to master to ensure victory.

That’s one of the major takeaways for Conqueror’s Blade. This game is hard and requires a ton of strategy and precise execution to win. This isn’t a bad thing, and in fact it’ll be a huge draw for those of you who are fans of hard-core strategy games. You’ll have to cooperate with your teammates and you’ll likely want to start joining battles with friends for maximum effectiveness.

There is no defined storyline but hard core strategy gamers would definitely find this game interesting as it combines Total War and Mount and Blade into a simple gaming experience which has drawn my attention as I cling to this game.

As for monetization, Conqueror’s Blade avoids all the pitfalls of modern free to play games with ease. The game does feature an in-game shop but the only items you can buy are experience boosters, cosmetic skins, and premium account access. Having a premium account offers you extra experience, unit xp, and honor at a 30% increased rate among a few other benefits. The only reason I don’t see this as an issue is that battles give a pretty generous amount of experience in the early game and they’re fun to play, so it doesn’t feel like an artificial grind.

The only one problem I ran into during my time with Conqueror’s Blade was the occasional crash. This only happened when the game was trying to load to the character selection screen and it only happened two or three times over a week and a half of playing so it wasn’t a massive issue. This is something that can easily be fixed as the game receives more polish.

Overall, Conqueror’s Blade is a decent game that’s sure to challenge even more seasoned strategy game veterans. It is in desperate need of some polish and some more refined tutorials, but the foundation that they’re building on is solid. If you’re into hard-core strategy RPGs, it’s worth checking out.

Processor: Intel Core i5 4-Core Processor and above.

SC ORDERS TO REMOVE SLUMS FROM RAILWAY TRACKS IN DELHI