Feminism and misandry: the need for awareness 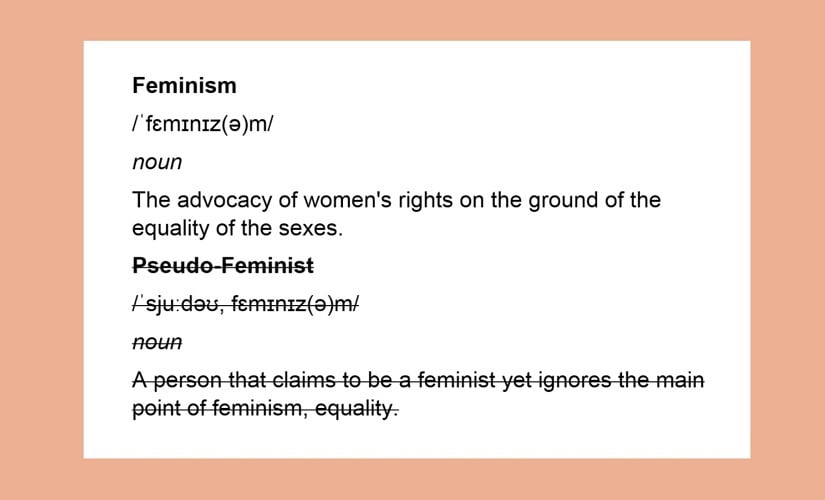 The word feminist talks about how women aren’t treated equally simply because they are women. Feminism talks about how women should be given equal rights and opportunities as the other gender. Feminism is a series of social, political, and philosophical movements for achieving equality among all genders.  It is no secret that women all over the world are discriminated against due to their gender.  Efforts are made to tackle gender stereotypes and ensure everyone is treated equally in society.  There have been protests, movements, talks, etc for the fight for women’s rights.

Feminism is often confused with pseudo-feminism. Pseudo-feminism insinuates that women are superior to men and deserve more respect. Pseudo-feminists have strayed away from the actual meaning of feminism and subjected themselves to hating on men and finding ways to seek retribution instead of equality.

Pseudo-feminists are individuals who haven’t grasped the exact meaning of feminism and use feminism to overpower men and show their dominance. Pseudo-feminists are also referred to as fake feminists as their main goal is to demean the other gender.  To justify themselves, pseudo-feminists said “due to our suffering in the past as we were treated unequally,  it gives us a free pass to surpass men because they deserve it.” this is not at all what feminism stands for.

Here are some cases related to pseudo-feminism:

Hitesha chandranee vs Kamraj: this case is about a makeup artist Hitesha chandranee claimed that a Zomato employee, Kamraj, didn’t cooperate with her and allegedly assaulted her. She went on and posted a video on social media talking about the situation. She also filed an FIR against the zomato employee This whole incident took place on March 9. This case quickly took a turn when Kamraj filed an FIR against her for false allegations. The cops instigated the case and found out that Hitesh was the one who assaulted and abused the employee. Later on, the investigating officer stated: “there is nothing more to investigate merely based on allegations from the accused and the woman.” This case was closed on March 22, 2021.

Jasleen Kaur VS Saravjeet Singh: this case is about a student, Jasleen Kaur claimed that a 28-year-old resident, saravjeet Singh verbally abused her near the traffic signal in Delhi. She immediately took to Facebook and posted about the incident. She mentioned his license plate number and also put up his stories. The story went viral on many news outlets. News channels were calling him a “pervert.” Saravjeet Singh commented on the same Facebook post about his side of the story. There was an eyewitness who came in support of Saravjeet. The witness claimed that it was Jasleen who first started verbally abusing. Due to this incident, Saravjeet went through mental harassment and had trouble finding jobs for the next three years.

These are just two cases there are millions more. Men everywhere are considered to be the bad guys whereas women are believed. Feminism is not about thinking that women are always right feminism is about demanding equality. Feminism is about standing up for the rights of women, including the right to vote, hold public office, work, earn fair wages, equal pay and reduce the gender pay gap, own land, obtain employment, enter into contracts, have equal rights within marriage and have maternity leave. Feminists also work to ensure access to legal abortions and social inclusion and to protect women and girls from rape, sexual harassment, and domestic violence.

We live in a culture where women come across many challenges daily. And adding to that, some individuals believe that the true definition of feminism is that women are superior to men. We must not use feminism to go around spreading hate. In the end, we all need to educate ourselves and better our understandings of sensitive topics such as feminism.

Equality is a birthright of every person, no one should deprive others of it.