Explained – What is National Monetisation Pipeline? 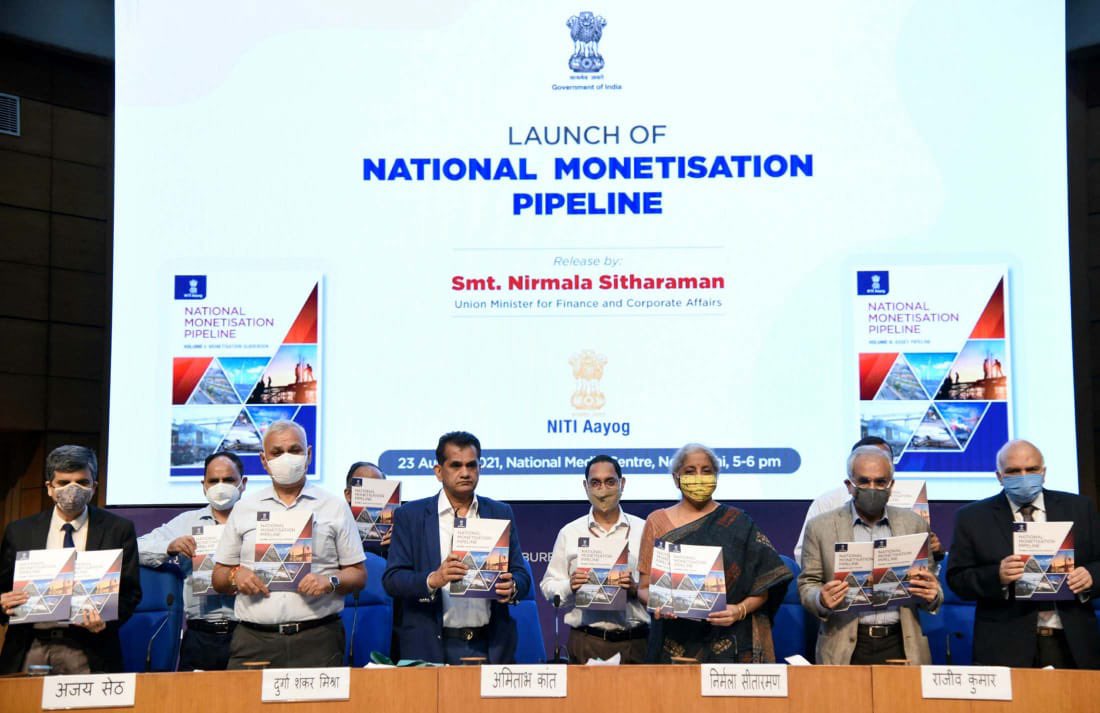 Earlier this week, on August 23, Nirmala Sitharaman, finance minister of India, announced the National Monetisation Pipeline. The four-year NMP, was launched with a plan to unlock value in brownfield projects by engaging the private sector and transferring the rights to them using the funds for infrastructure creation across the country. However, the ownership in projects will remain with the Centre.

It may be noted that the NMP is expected to fetch the government an estimated revenue of Rs 6 lakh crore over four years till FY25. The NMP is an effort to list out the infrastructure assets of India to be sold over the next four-years. “The ownership of the assets remain with the Government (and) there should be mandatory handback,” stated the finance minister.

Roads, railways and power sector assets will comprise over 66 per cent of the total estimated value of the assets to be monetised, with the balance coming from sectors including telecom, mining, aviation, ports, natural gas and petroleum product pipelines, warehouses and stadiums, informed the finance minister during the launch on Monday.

The finance minister clarified that NMP will comprise of brownfield assets alone belonging to the Central government and public sector units, and no land will be part of the monetisation process. Further, assets will not change hands and ownership will remain with the government.

“They are all de-risked assets, no doubt and the value of the consideration and the private investment which will come into maintaining it, optimally utilising it, putting it for a larger cause, all this will generate greater value, and it will unlock resources for the economy, which is what we want,” Sitharaman said at the launch.

According to the finance minister, the Indian economy requires more resources. “The economy wants that kind of liquidity that kind of value unlocking with which we can move forward,” she highlighted.

“I think it’s important that India recognizes that the time has come from making the most out of our assets and in this pipeline we have listed that out so that they can be better monetized,” the finance minister noted.

“The philosophy of asset monetisation is creation of new assets through monetisation. The aim is to unlock the value of government investments and public money in infrastructure and take this country forward,” stated Amitabh Kant, Niti Aayog CEO.

In a monetisation transaction, the government is basically transferring revenue rights to private parties for a specified transaction period in return for upfront money, revenue share basis and commitment of investments in the assets. Real estate investment trusts (REITs) and infrastructure investment trusts (InvITs), for instance, are the key structures being used to monetise assets in the roads and power sectors. These are also listed on stock exchanges, providing investors liquidity through secondary markets as well.

The NMP, which will work in tandem with the National Investment Pipeline (NIP), will bring in investment for underutilised or languishing brownfield units, generating greater value for the government which will in turn help India’s economy. Notably, assets put up for investment to the private sector and global investors will be mandatorily handed back to the government after a defined period, of about 25-30 years.

The NMP will run co-terminus with the National Infrastructure Pipeline of Rs 100 lakh crore announced in December 2019. The estimated amount to be raised through monetisation is around 14 per cent of the proposed outlay for Centre of Rs 43 lakh crore under NIP.

Among the assets on the NMP list include – 26,700 km of roads, railway stations, train operations and tracks, 28608 CKT KM worth of power transmission lines, 6 GW of hydroelectric and solar power assets, 2.86 lakh km of fibre assets and 14917 towers in the telecom sector, 8154 km of natural gas pipelines and 3930 km of petroleum product pipelines.

In the roads sector, the government has already monetised 1400 km of national highways worth Rs 17,000 crore. Another give assets have been monetised through a PowerGrid InvIT raising Rs 7700 crore.