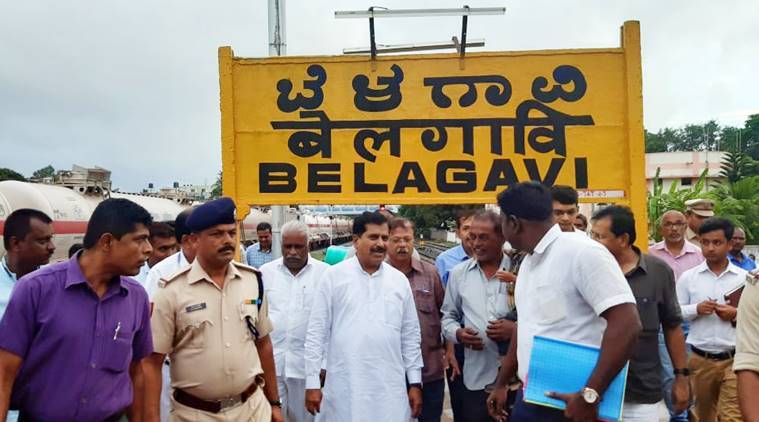 Since the States Reorganisation Act of 1956, when boundaries were drawn on linguistic grounds, the border town of Belagavi has been a part of Karnataka. However, the Karnataka-Maharashtra inter-state border conflict flares up now and then. During the recent ‘Maha Melava’ march, some Kannada activists blackened the face of a leader of the Maharashtra Ekikaran Samiti (MES), a Marathi organisation founded to demand Belagavi’s admission into Maharashtra.

The Maharashtra Ekikaran Samiti, a socio political party representing the interests of the Marathi-speaking population in the Belagavi region, is pitted against pro-Kannada Karnataka groups who believe Belagavi is now a Kannada-speaking district, with a single-point agenda of unifying Marathi-speaking villages in Belagavi with Maharashtra (in opposition to the 1956 reorganisation of states).

The issue has in the past caused political heat on both sides of the border, with established political parties in Maharashtra and Karnataka tending to adopt a partisan approach, with their Marathi and Kannada-speaking voting bases in mind.

The Maharashtra Ekikaran Samiti and other pro-Marathi organisations argue that Belagavi is primarily a Marathi-speaking region, with several portions being entirely Marathi-speaking, and that it should be a part of Maharashtra rather than Karnataka, which is a Kannada-speaking state.

According to the MES and other organisations, almost 45 percent of the district’s population speaks Marathi, while pro-Kannada organisations maintain that the Marathi population is only around 35 percent, which is on level with the region’s Kannada-speaking population.

The area of Belagavi (Belgaum) was part of the Bombay presidency at the time of independence. The MES was founded in 1948 with the primary purpose of promoting Belgaum’s unification with Maharashtra during the state reorganisation. During the reorganisation of states along linguistic lines, the area was merged with the state of Mysore (now Karnataka).

Following the state reorganisation, the MES became a political force to be reckoned with in Belagavi, owing to its strong support among the region’s large Marathi community.

Since 2012, when Karnataka legislature sessions resumed in Belagavi, the MES has held a protest rally called the Maha Melava rally outside the Suvarna Soudha – the location of the legislature meeting – to urge for Belagavi’s union with Maharashtra. In Belagavi, the state of Karnataka erected the Suvarna Soudha, a duplicate of the Vidhana Soudha in Bengaluru, at a cost of Rs 400 crore to integrate the region into the state and suppress the threat of pro-Marathi organisations seeking unification with Maharashtra.

On December 13, as the Karnataka legislature’s winter session was about to begin in Belagavi, the MES organised a protest gathering outside the Suvarna Soudha – without getting any permission from the government.

The demonstration was denied permission by the Belagavi district government, which feared violence between pro-Marathi and pro-Kannada supporters.

MES militants assembled at the location despite the lack of authorization to organise the protest, and were involved in a clash with Kannada activists from the Karnataka Navanirmana Vedike. Manohar Kinekar and Deepak Dalvi, MES leaders, were smeared with black ink by pro-Kannada protestors. The MES leaders continued on to give speeches at the location.

However, a Karnataka flag was burned during protests in Kolhapur, Maharashtra, during the time, and this matter was brought up in the Karnataka legislative assembly by M Annadani, a member of the Janata Dal (Secular) party, who presented a censure resolution over the incident.

Following this event, pro-Kannada demonstrators allegedly smeared a statue of the Maratha warrior symbol Shivaji Maharaj in a neighbourhood in north Bengaluru. Pro-Marathi protestors are accused of vandalising a bust of Kannada warrior legend Sangolli Rayanna in Angol, south Belagavi, on December 17 in retaliation.

Following reports of the alleged damage of a Shivaji statue in Bengaluru, a gathering of pro-Marathi activists gathered outside the Sambhaji circle in Belagavi on December 17, with some miscreants hurling stones at Karnataka government cars. The Belagavi district administration issued prohibitory measures as a result of the December 17 occurrences.

This type of violence has occurred frequently in the area. Nine individuals were killed in police shooting in Belagavi amid border agitations sponsored by Maharashtra political figures in 1986, in one of the deadliest incidents of violence over the border conflict.

The Maharashtra government has filed a legal challenge against Karnataka’s merger of Belagavi, and the case is currently before the Supreme Court. Maharashtra and MES have previously requested that Belagavi become a union territory. When the MES was in control in the Belagavi City Council in 2005, it approved a resolution urging the state and centre to integrate Marathi districts in Belagavi into Maharashtra.

The Karnataka government of the Congress and JDS ordered disintegration of the BCC over the move.