CONTEMPT OF COURT AND FREEDOM OF EXPRESSION: A DELICATE BALANCE 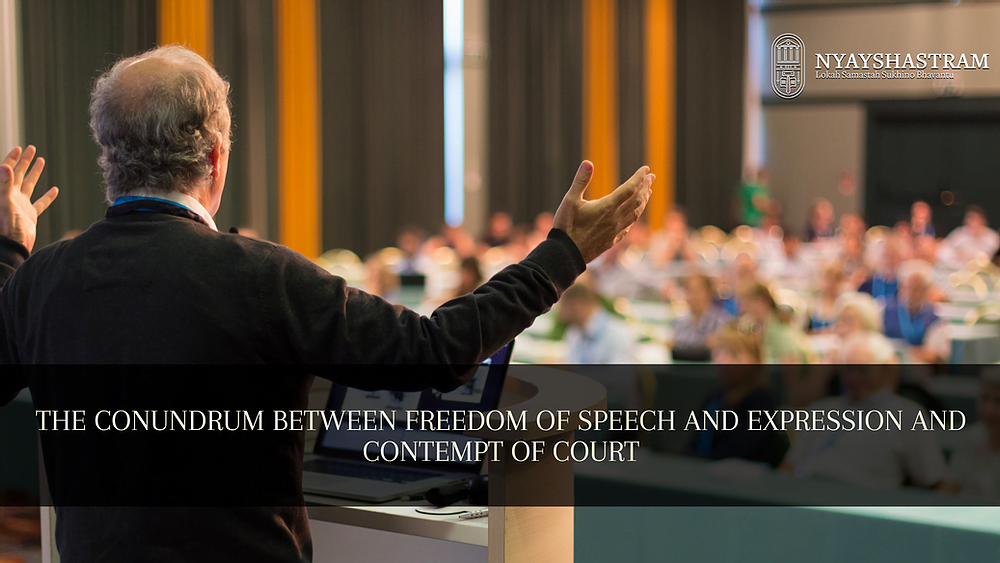 Freedom, a term familiar for the ones living in a democratic country. It is not only a right but a power that everyone wishes to exercise. In recent times, it feels more necessary to acquire this power. So, one can stand for themselves without the fear of any legal penalty. And here comes the narrow line between Freedom of expression and the Contempt of Court which should not be crossed.

Yes, you have the right to Freedom of expression but that does not allow you to vocalize all your thoughts, as we know with great power comes great responsibility. In our lives, we use freedom of speech as a shield against the oppressors but what is it in the actual sense?

Article 19(1)(a) sums it up in approx10 words i.e. “all citizens have the right to freedom of speech and expression” but the scope that it carries is much wider than that.

Freedom of speech and expression is regarded as the first condition of liberty. In modern times it is widely accepted that the right to freedom of speech and expression is the essence of a free society and it must be a safeguard at all times. It also adds up to the smooth administration of democracy as the citizens of the country can participate in political and social matters. Had it not been there in practice, our country would have witnessed an autocratic rule by now (and none wants to live under a rule like Hitler’s).

But as restrictions come hand in hand with power. Clause (2) of Article 19 of the Indian Constitution enables the legislature to impose certain restrictions:

As an individual, one will not like these curtailments of rights but limiting the powers are as important as exercising them. Most of this censorship is related to hate speech, defaming statements, maintaining the public order, national sovereignty, etc.

One of these elements is contempt of court. It is referred to as the offense of being disobedient to or disrespectful towards a court of law and its officers in the form of behavior that opposes or defies the court’s authority, justice, and dignity.

But one interesting fact in this regard is the powers of the Judge. According to the constitution, the Judge can impose sanctions for such acts that distort the normal functioning of the court. Surprising, isn’t it?

Now let us dig deep and know about the Contempt of Court, to avoid doing anything that can penalize us in the future.

The offense of contempt was categorized by the Contempt of Courts Act 1971, into Civil and Criminal. If a person deliberately acts to be disobedient to any judgment, decree, order, etc, then the person will be penalized under the Civil Contempt.

On the other hand, a person can be penalized under Criminal Contempt if they published something that scandalizes the court or obstructs the administration of justice in any other manner.

You must be wondering about these contrasting rules, right? How is it possible that one right gives you the ability to express yourself without any hindrance, whereas the other limits you for the same?

This wrangle is going on since the Contempt of Court was added to the constitution. Simultaneously, freedom of speech and expression was raised as a concern. While several lawmakers said contempt of court was a necessary power of the judiciary, others said contempt of laws is prone to abuse and could restrict freedom of speech and expression guaranteed as fundamental rights. In the end, some rest the case by defining this unseen line between the two as “Subjective.”

Even the articles of the constitution seem to argue with one another. Article 19(1)(a) guarantees the freedom of speech and expression, but Article 19(2) interprets that contempt of court should not be committed while exercising that right. The abuse of the liberty of free speech and expression carries the case nearer to the law of contempt.

One can argue that what is the use of the right if the citizen cannot criticize the judiciary in the need of the hour. The simplest answer for that would be, the contempt of court jurisdiction is exercised not to protect the dignity of an individual judge, but to protect the administration of justice from being maligned.

Free expression is the fundamental fountainhead of democracy. Along with that, every individual must remember that this right is not only to criticize or defame the acts of government or judiciary. But to make the best use of them keeping in mind the laws of the court. Rare conflict of interest between the judiciary and the citizens of the country is common. However, a lack of respect between the two can hamper the administration of justice and truth.

Hence, there is a need for balance in exercising the power of contempt jurisdiction by the courts and the right of the citizens to express and hold the idea, and that presents a challenge to any given democratic set-up.

All you need to know about the #StudentCreditCard Scheme