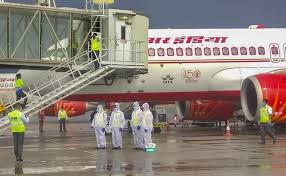 The whole world is stuck in this #dystopian reality nobody wished for and this has directly as well as indirectly caused a lot of feathers to ruffle between nations. The disputes between #China and #India are not unknown; however, new issues keep creeping up every day somehow.

On the 5th of November 2020, China announced that it will be temporarily #blocking the #entry of foreign nationals in #India from entering the country. With the backdrop of the Air India (AI) Vande Bharat Mission (VBM) and the report of about thirty people being tested positive for the virus, has urged China to take up this decision.

This mission had planned to send across four flights from November 13 to December 4 and this seems to have been halted due to this new decision by the government of China. This came into light when the Delhi-Wuhan flight was cancelled citing that the reason is that it “does not have approval of Chinese authorities”.

It has been reported that China has decided to #ban the entry of individuals from other #countries such as Belgium, UK and Philippines as well. According to the website of the Chinese embassy in India, “Due to the Covid-19 pandemic, it’s hereby announced that China has decided to temporarily suspend the entry into China by foreign nationals in India holding valid Chinese visas or residence permits. The Chinese Embassy/consulates in India will not stamp the health declaration forms for the holders of the above-mentioned categories of visa or residence permits.”

However, for all those who panicked with this decision, there is a flip side to the decision that may be in your #favour. The website also cited that those who hold Chinese diplomatic, service, courtesy and C visas are not affected and those who have immediate needs to visit china on the grounds of humanitarian reasons can simply apply for visas. It also added that this suspension is a temporary measure taken by the Chinese government in order to manage the pandemic and that further arrangements would be done shortly.

With the breaking out of the news, many speculations were made so as to draw parallels with the disturbed relations between the two countries as well as the identified origin of the virus at the end of last year. Citizens of India took to Twitter and used phrases such as “Ulta Chor Kotwaal Ko Daante” and humorously spoke about the decision.

However, before the situation gets out of hand, government officials have issued statements that the #suspension is not India-specific and has identified other countries that have also been banned from entering China.

China has expressed that despite of getting the situation under control; the new cases are surging back as a result of lift on #travel #bans and such. Owing to the increasing cases and the inevitable rise in cases, now that the seasons are changing, many European countries have decided to go under lockdown for the second time. Countries such as USA and India which stand on the top of the chart are yet to take further decisions.