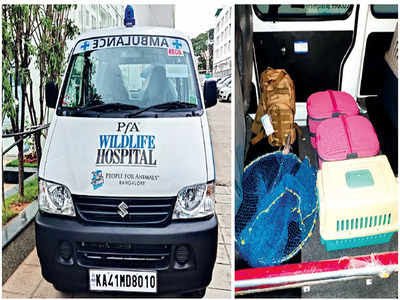 The infrastructure for the urban wildlife rescue in Yelahanka will soon include a brand-new ambulance with advanced animal rescue equipment. It will be managed by People for Animals (PfA) Hospital, which has its main office in Uttarahalli, a western Bengaluru neighbourhood.

The General Manager/Chief veterinary surgeon Colonel Dr Navaz Sharif said, “We have been getting a lot of animal rescue calls in Yelahanka and its surroundings where there are a lot of lakes and green vegetation including a hub for urban wildlife at the University of Agricultural Sciences, Gandhi Krishi Vignan Kendra, GKVK, on Bellary Road.”

When an animal was in need of rescue in the past, they had to send their rescue squad all the way from Kengeri, Uttarahalli Main Road to Yelahanka. If one were to travel the Dr. Puneeth Rajkumar Road, it would be a few kilometres shorter and easily be around 44 kilometres away.

The journey to Yelahanka would take at least an hour and fifteen minutes due to city traffic, and by that time the rescue volunteers would not be able to understand what happened with the animal.

Rajasekhar Halaharvi, a 51-year-old native of Yelahanka who works as the head of an IT company and is a software engineer, wanted to contribute to the cause of animal rescue.

He then made the decision to give some money and buy an animal ambulance that would be stationed at his home in Yelahanka and used for animal rescue missions in and around that area.

He got in touch with PfA’s general manager and volunteered to donate Rs. 8 lakh to buy an ambulance that would only be used to save stray animals and urban wildlife.

A Maruti Eco was quickly purchased for Rs. 6 lakh, and the new van was converted into an animal ambulance with Rs. 2 lakh worth of emergency tools. The PfA also appointed a driver and a volunteer for rescue.

“This is just a start, and I am looking forward to expanding the presence of animal ambulances across Bengaluru, and let’s see how it goes,” Halaharvi said.