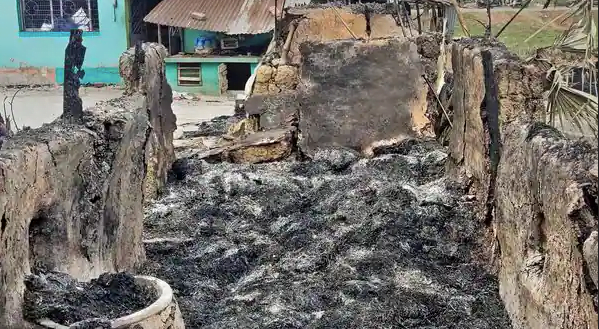 A division bench headed by the Chief Justice directed the West Bengal government to file a status report on the Rampurhat violence by 2 pm on Thursday. The court also ordered the government to install CCTV cameras in presence of the district judge and 24×7 CCTV surveillance of the scene of occurrence. It also asked the Central Forensic Science Laboratory (CFSL) team from Delhi to visit the spot of the incident and collect the materials required for the forensic examination without any delay.

The police have denied the political angle and said it was a case of rivalry between two groups. According to the police, 11 people were arrested the same day for their involvement in the incident. Eleven others were arrested on Wednesday and all are being questioned. The West Bengal government has constituted a Special Investigation Team (SIT) headed by Additional Director General (CID) Gyanwant Singh to probe the incident.

The Birbhum violence has led to a fresh war of words with West Bengal’s governor, Jagdeep Dhankhar accusing the Mamata Banerjee led government of chaos and lawlessness in the state. Dhankhar called the death of eight people “horrific” and claimed that the state was in the grip of a culture of “violence and lawlessness”.

The violence and killings have refreshed sparring between the Mamata Banerjee led TMC and the BJP, which has demanded her sacking and a central investigation. BJP leader and Leader of the Opposition, Suvendu Adhikari demanded that Mamata Banerjee should resign, alleging that attempts were being made to shield the culprits. “The Chief Minister is also the home minister of the state. She has failed in discharging her duties as the home minister. She should immediately resign,” he said. The BJP also demanded President’s Rule to be imposed.

A delegation of MP’s from Bengal met Union Home Minister Amit Shah and sought his intervention and action against the perpetrators of the crime. Following this, the Union Home Ministry has also sought a report.

Chief Minister Mamata Banerjee said  “The government is ours, we are concerned about people in our state. We would never want anyone to suffer. The Birbhum, Rampurhat incident is unfortunate. I have immediately dismissed the OC, SDPO. I will go to Rampurhat tomorrow”

Lashing out at the BJP, she said, “Not justifying Birbhum killings, but such incidents are more frequent in UP, Gujarat, Madhya Pradesh, Bihar and Rajasthan.”