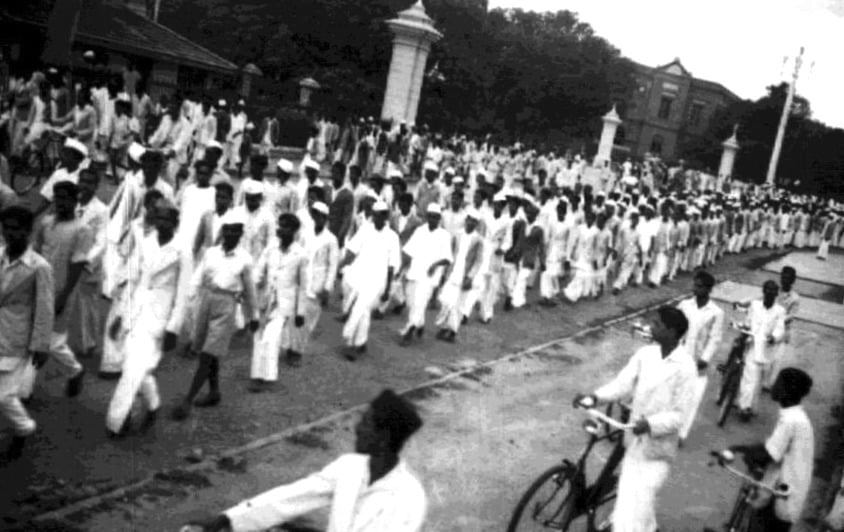 While cities like Bombay and Calcutta always come up while talking about freedom struggle, Namma Bengaluru’s contribution to the movement isn’t talked about as much. From freedom fighters in the prisons of Freedom park to Mahatma Gandhi’s visit to the city, Bengaluru remained very active during the freedom struggle. Here is a look back into some of the important moments of Bengaluru’s freedom fight.

The sepoy mutiny of 1857 was an important point in Indian independence struggle. But what is not know is that even 25 years before that, some of the soldiers from Bengaluru had planned a mutiny to throw out the Britishers. Due to the work of a snitch, the plan dint unfurl as planned. Since 1800 Bengaluru was very expressive of their resentment towards the British. After the failure of mutiny plan, the freedom movement was further strengthened with the founding of organizations like Theosophical Society in 1886 and Vokkaligara Sangha in 1906 which worked towards raising awareness in the community. In 1886, the British also constructed a central jail in the city, which is popularly known today as Freedom park, to imprison freedom fighters from across the country.

The working class of the city also played important roles in the freedom struggle. When the government passed the trade Union Act in 1926, the popular textile industry, Binny Mill didn’t care for the rights of the labourers. So when an agitation was led by some journalists and union workers, the police opened fire on the protestors. But this dint stop them for fighting for what was right. With the support of a few congressmen, the place soon became a source of strength to freedom fighters. One of their workers, MA Parashuram, also established Daridranarayana Seva Sangha in 1933 to propagate the views of Congress.

During the civil disobedience movement, a second round of satyagrahas started to boycott foreign clothes and urge people to buy and wear more khadi. A group of people led by GR Swamy picketed in front of cloth shops in the Cantonment region of the city during February 1932. During this, 135 workers were convicted and also confined.

In October 1937, KF Nariman of the Bombay Congress Committee (who was banned by the Mysuru government during the time for his previous incendiary speeches) was all set to deliver a speech at the Bannappa park in Cubbonpete when he was pulled down and arrested by a police officer. Students enraged by this incident gathered in large numbers in the spot to protest the arrest. Even though they were unarmed, the police opened fire on them which killed 1 and injured 73 people. We should also remember the satyagraha started by T Siddalingaiah in 1939 in the same park during the Karnataka state’s civil disobedience movement. Along with these the park also witnessed numerous other protests and satyagrahas against Britishers. The park also was the centre spot during Quit India movement to meet and agitate.

In 1942, during Quit India movement, an unfortunate event happened on 17th August, near Mysuru Circle. On the 9th day of their protest, 1000s of people from the city were peacefully moving along the streets cheering Inquilab Zindabad! But some protestors resorted to violence and set fire to a post office near Aralpete. They attacked one more post office and police station near Chikpete. When the police interfered, the protestors threw soda bottles at them. This led the policemen to open fire which killed 6 people and injured more than 30 people. Thimmanna Das, VP Muniswamy and J Lingaiah were some of the frontiers of the protests.

While remembering the city’s freedom fight, we should also remember some prominent activists like H. Narasimhaiah, HR Doreswamy and Pandit Sudhakara Chaturvedi who contributed greatly for the cause.

Gandhiji was also a frequent visitor of the city during freedom struggle and he paid five visits in the period between 1915-1936. His wife Kasturba Bai also accompanied him during his first visit. The city people were always excited to welcome him, and thousands of people thronged the places where he gave speeches. Places like Ananda Rao Circle, Nandi Hills, Kumara Park East were some of the places where the Mahatma stayed during his visits.

He stayed at the Kumara Park guest house during his visit in 1927, for 90 days. Today, there is plaque to mark the historic importance of the place where he used to conduct public gatherings and prayer meets. In 1936, he stayed at Nandi hills for 45 days months to recover from his high blood pressure issues. He frequently conducted Bhajan sessions in the neighbourhood which witnessed attendance by large groups.

During his visits to the city he delivered speeches at Mahila Seva Samaj and National High School of Basavanagudi. Gandhi Maidan, opposite Minto hospital was also one of the places where Gandhians gathered to propagate their principles and host Khadi fests which were always happening throughout the city during the freedom struggle.

Many youngsters in the city today aren’t very aware of the historical values of these places nor the role of Bengaluru in freedom movement. One should always remember that the freedom we are enjoying today was achieved through the sacrifices of many people and should make more efforts to educate themselves about these historical events.