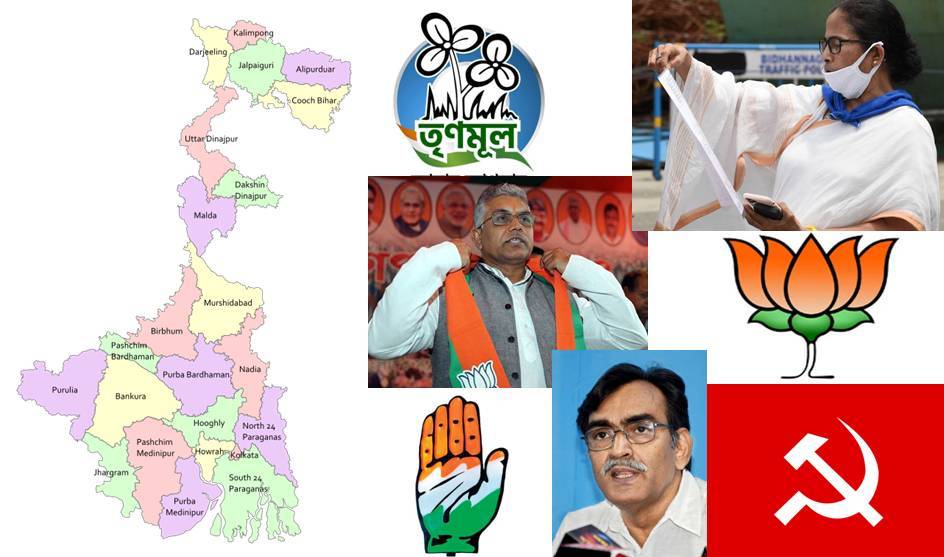 The Bidhan Sabha elections in West Bengal are just round the corner and all the parties contesting are gearing up for a fight. At present All India Trinamool Congress (TMC) holds the majority in the Legislative Assembly, with the party leader Mamata Banerjee as the Chief Minister of the state. Other than the ruling party, contesting in the election are Bharatiya Janata Party (BJP); the Mahajot consisting of Indian National Congress (INC) and the Left Front; Gorkha Janamukti Morcha (GJM) and; All India Majlis-e-Iiitehadul Muslimeen.

On December 10, the ruling part of West Bengal TMC released a “report card” that details all the development activities the government has done in its 10 years of rule. TMC said this will be their “primary weapon” in this election.

The party also launched one of its biggest outreach programmes, Bongodhhoni (Sound of Bengal) where party workers will reach out to around 10 million households. The government also began the Duare Sarkar scheme where the state administration officials have been directed to highlight the Bangla Sahayata Kendra, which are a chain of centres at the grassroots level to provide information regarding the state government’s schemes. Also, camps have been set up in every village and civic body in the state from December 1 which will be there till January 28 to help people with various government facilities.

The Bharatiya Janata Party (BJP) has released a list of leaders for the state election management team for the Assembly polls in West Bengal next year. The tours of top office-bearers have been finalised after a decision by the party that BJP President JP Nadda and Union Home Minister Amit Shah will visit the state regularly till the Assembly polls to take a stock of the preparations by the state unit.

Also, BJP has launched rigorous campaign in South Bengal as BJP is well aware that to dethrone Mamata in 2021, it needs to make a dent in her stronghold of South Bengal. And the two 24 Parganas North and South alone make for 64 seats in the Legislative Assembly of 294. The BJP drew a blank here in 2016 polls.

In recent news, On Thursday, the convoys of JP Nadda and Kailash Vijayvargiya, BJP’s general secretary in-charge of Bengal were attacked in Diamond Harbour. West Bengal’s BJP chief Dilip Ghosh, alleged TMC of the attack and wrote on Facebook, “Badal hobe, bodlao hobe (There shall be change and there shall be revenge).”

The fact that Nadda chose Diamond Harbour as venue for his rally is significant. It is just 50km from state capital Kolkata, the seat was won by Abhishek Banerjee (Mamata Banerjee’s nephew) for a second consecutive term by a huge margin of 3.2 lakh votes.

Trinamool and the BJP may seem to be the principal players in the Bengal elections, however, they are not the only ones that matter. There is the Communist Party of India (Marxist) and the Congress, two unlikely foes who joined hands in the 2016 Bidhan Sabha elections in West Bengal and fared better than BJP.

CPI(M) MLA Sujan Chakraborty pitched the Left-Congress alliance as the only alternative to the BJP and the Trinamool Congress (TMC), claiming that the saffron party’s vote share had been on the decline after its victory in the 2019 Lok Sabha elections.

But the situation seems very dicey for this alliance in the upcoming election. Political experts believe that the fight for existence has brought about this Left-Congress alliance. Professor Maidul Islam, who teaches political science at the Centre for Studies in Social Sciences in Kolkata said, “The main challenge of the Left and Congress alliance is to keep the status quo in the assembly. As of now, they are the principal opposition. If they don’t win back their votes from the BJP, grave danger is waiting for the future of Bengal.”