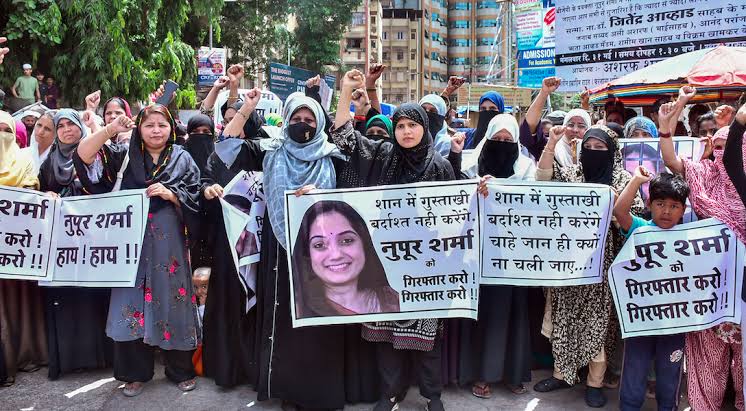 On Friday, 10 June, a wave of protests took place in numerous states, including the national capital Delhi, in response to two Bharatiya Janata Party (BJP) politicians’ insulting statements about Prophet Muhammad. The conflict arose when Nupur Sharma made derogatory remarks about Prophet Muhammad during a televised debate. As the debate intensified, BJP leader Naveen Jindal sent out a contentious tweet regarding the Prophet, which was later removed.

After Friday prayers, about a thousand people held protests at Delhi’s Jama Masjid. During the demonstration, many called for the arrest of suspended BJP spokesperson Nupur Sharma, who made controversial remarks about Prophet Muhammad.

The demonstrations were quickly brought under control, according to Shweta Chauhan, Deputy Commissioner of Police for the Central District, who said “Almost 1,500 people had gathered in Jama Masjid for Friday prayers. After the prayers, nearly 300 people came out and started to protest over inflammatory remarks by Nupur Sharma and Naveen Jindal.”

She added that “Protests were done on the street, without any permission, so legal action will be taken. We have identified some of the miscreants. We will take action as per law.”

“No call for protest was given by the masjid,” the Shahi Imam of Jama Masjid told ANI. “We don’t know who are the ones protesting. I think they belong to AIMIM [All India Majlis-e-Ittehadul Muslimeen] or are [AIMIM president Asaduddin] Owaisi’s people. We made it clear that if they want to protest, they can, but we will not support them.”

Protests were held in numerous places across Uttar Pradesh, including Lucknow, Moradabad, and Saharanpur.

Speaking to reporters, Chief Minister Yogi Adityanath stressed that action will be taken “against those disrupting peace” and that all “places will be monitored heavily”.

In Srinagar, “unknown persons” asked for a “spontaneous shutdown” in response to Nupur Sharma’s remarks, and all marketplaces, with the exception of the Raj Bagh area, observed a voluntary shutdown, local locals informed ThePrint. Local internet, including prepaid and postpaid connections, was also turned off at the same time.

According to images broadcast on TV news stations, protests in several districts of Uttar Pradesh became violent. Preemptively, Uttar Pradesh had enacted Article 144 in a number of districts, barring groups of more than four people from congregating in one location.