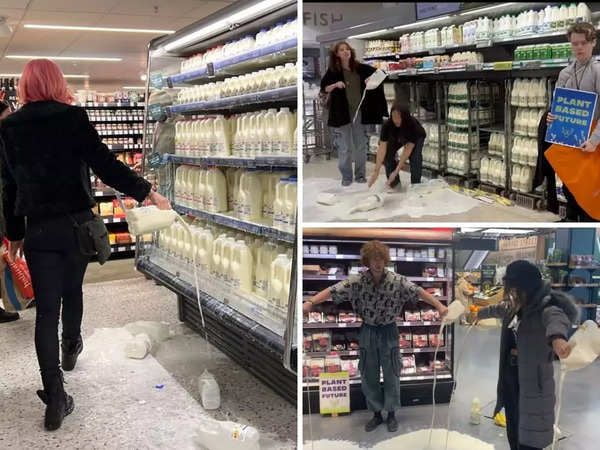 Anti dairy protests in the UK have received a lot of backlash on social media over the unnecessary wastage of milk cartons, even though a lot of kids are sleeping on an empty stomach amid the UK economic uncertainty. Animal Rebellion, an NGO fighting against the supply of dairy, posted about one such ‘milk pour’ campaign from Waitrose supermarket in Edinburgh. It tweeted, “Milk Pours are currently happening across the UK.” ‘Animal cruelty’ activists in Scotland are being called out by internet users, including the vegan community, for spilling milk in supermarkets as a part of an awareness campaign.

The environmental organization, with the goal of “transitioning to a plant-based food system,” said that “dairy, like all forms of animal farming, is an incredibly wasteful and destructive industry, and a major contributor to the climate crisis that is currently threatening all life on Earth.” The group has coordinated action in Waitrose, Whole Foods, and Marks & Spencer stores in London, Manchester, Norwich, and Edinburgh.

Skylar Sharples, an international development graduate from Bristol and one of the protesters at Harrods, said: “Supporters of Animal Rebellion are back acting because (Prime Minister) Liz Truss and Ranil Jayawardena (Secretary of State for Environment, Food and Rural Affairs) are again deciding to ignore calls to start building a better future. 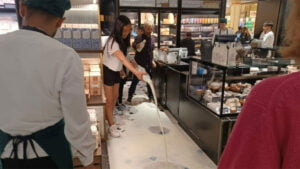 The protesters from the group have also been placing placards over joints of beef along with pouring milk out onto shop floors, products, displays across the country including at the Harrods store in London. As per the videos uploaded by the official Twitter handle on Animal Rebellion, the group is seen emptying cartons of milk on the floor, across cheese laden tables and more. The group has said that the protests are a call for a plant-based future and a wake-up call for the need to support farmers in switching to a sustainable plant-based food system.

The protest which involves destroying milk inside stores comes as many children across the world struggle with hunger, malnutrition and poverty. Animal Rebellion has stated that it is advocating for a plant-based future and emphasizing the importance of assisting farmers in transitioning to a sustainable plant-based food system.

Recently, many similar protests have been carried out in the UK. A few days ago, a group from Just Stop Oil, protesting fossil fuel extraction, almost destroyed Vincent van Gogh’s ‘Sunflowers’ painting by throwing soup over it.

In this article:anti dairy protests, plant based diet, uk, vegan