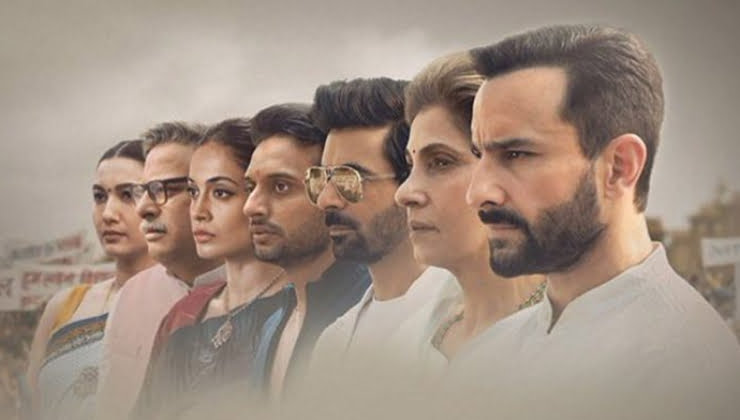 Tandav, Amazon Prime’s all-new political drama released on January 16, Friday, and turned heads almost immediately. The show revolves around Saif Ali Khan, a ruthless political leader; and the show addresses recent issues like the JNU protest and the farmers’ movement. The name of the series comes from the popular dance form, Tandav, which is associated with Hindu deities, including Shiv. It’s been three days since the release of the show and you’ve definitely witnessed some unrest regarding it. BJP MLA, Ram Kadam has lodged an official complaint against the makers of Tandav at the Ghatkopar police station, Mumbai on 17 December. He has urged authorities to take ‘strict action’ against the actors, producers and director of the show.

Other BJP leaders have also gone on to criticize the show and want it to be banned. They also want the makers of the show to be arrested, as the show is ‘hurtful to Hindus and anti-Dalit’. The sequences BJP leaders had pointed fingers at included a scene in the first episode where Mohd Zeeshan Ayyub, playing Lord Shiv in a college play, and an actor portraying mythological sage-messenger Narad Muni, talk about ways to build a social media following for the deity that rivals that of Lord Ram. The scene seeks to show the deity uttering a cuss word that in the show’s defense has been beeped out. Another scene that gave rise to controversy was one where the PM, played by Tigmanshu Dhulia, heaps casteist insults on Anup Soni, playing the role of a Dalit politician.

BJP leaders have asked the Ministry of Information & Broadcasting (I&B) to regulate streaming platforms like Amazon Prime that currently, do not require their content to be cleared by any agency, unlike movies, which have to be approved by the Censor board. Last year, the government brought streaming platforms under the purview of the I&B ministry.

BJP MP from Mumbai, Kotak, in conversation with ThePrint said that he has approached I&B Minister Prakash Javadekar with a request to regulate OTT platforms. He said Tandav has hurt Hindu sentiments and “this is not the first time such incidents are happening”. “Every time there is sinister design to portray Hindu deities in poor light, but we can’t do anything in the absence of a regulator,” Kotak said. “I have requested Prakash ji to immediately ban this series and install a regulator for future programs. They are global platforms and it has become a fashion to denigrate Hindu gods. Can they show the gods of another religion in such a way?” he added.

Delhi BJP leader Kapil Mishra also hopped onto the bandwagon and called the web series anti-Dalit and “full of communal hatred against Hindus”.

Chandigarh’s BJP spokesperson, Gaurav Goel also wrote to the Director-General of Police on 17 January and sought the arrest of the series’ makers. In his complaint, he has said the show has ‘highly objectionable, offensive content’, and that actors are seen ‘insulting Hindu deities openly’.

On Sunday, 17 December, the Ministry of Information & Broadcasting sought an explanation from Amazon Prime Video on the issue, as reported by The Hindu. When contacted about the complaints, the Amazon Prime Video Public Relations team said the platform “won’t be responding” on the matter.

Tandav – A ‘thrilling’ let down