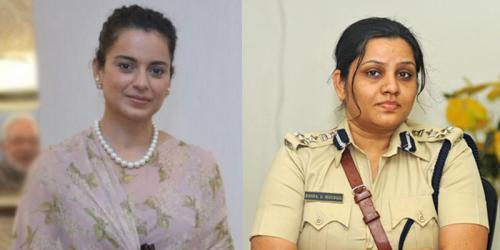 Recently a #Twitter spat followed between IPS officer #DRoopa and a Twitter user who goes by the name ‘#TrueIndology’, over the origin and importance of #firecrackers in India.

On November 14, D Roopa- the Home Secretary to the Government of Karnataka posted a status in #Facebook expressing her ‘aghast’ to see ‘some intellectual, highly educated and respectable citizens’ jeering the crowd and violating the ban of bursting firecrackers. On posting the same in Twitter, several users questioned her move and asked whether she should question the customs of other religions too.

The #ProRight wing user, ‘True Indology’ argued with Roopa that crackers have been mentioned in ancient #IndianScriptures. To which, the IPS officer strongly contested and demanded proofs. The ‘faceless and nameless’ user had also called Roopa’s responses a result of ‘entitlement of #babus and #arrogance’. After a long drawn battle between the two, True Indology’s profile was suspended by Twitter on Wednesday. This further aggravated the situation and led several personalities question the suspension.

Actor #KanganaRanaut led the outrage and questioned Twitter co-founder, Jack Dorsey for suspending the account. In another tweet she lashed the IPS officer by calling her ‘#SoreLoser’ and thus began the #TwitterWar of ‘#ShameOnYou @D_Roopa_IPS (sic)’.

Very soon, a new Twitter hash tag trend with #BringBackTrueIndology began on Wednesday morning. Delhi BJP leader Kapil Mishra said that this is the second time Twiiter has ‘#unreasonably’ suspended one of the ‘most #informative’ and ‘#decent’ Twitter handles on the platform. OpIndia Editor Nupur Sharma asked, “So what exactly did True Indology do this time?” Author and Scientist Anand Ranganathan also expressed his displeasure by Twitter’s act to suspend the account.

However, the exact reason for the suspension of the account is not revealed yet. Several Twitter users claim that the True Indology account ‘just stated facts’ and ‘gave evidence’ to prove his point during the argument without ‘offending or hurting’ anyone. In fact the hashtag war of #BringBackTrueIndology is one of the most trending terms in Twitter since few days.

Senior Congress leader, Abhishek Manu Singhvi has said that it does not suit IPS officers of the country to be arguing with Twitter handles ‘that too during working hours’.

The owner of the page, True Indology further shared in Instagram that,

“She asked me for my personal details. I refused to divulge those details. She then said, “Your time is up”. And boom. My account was suspended within 5 minutes. What a sweet coincidence! Twitter sent no mail. Gave no reason. Simply suspended my account. I did not divulge personal details. Hence, I was only digitally eliminated. What would have happened if I had? I shudder to think.”

Recently, such Twiterrati debates and polarization of public opinion on sensitive aspects have become a regular occurring event. In another Instagram post, the ‘True Indology’ said that,

“Yes, my account has been unfairly suspended. We all know why it was suspended. Yes, it is indeed very saddening and exasperating to see that all the time and efforts put in to cultivate the account went down the drain because somebody took it upon her ego. The account had good reach and it was quite handy in making a lot of people aware of the issues we face as a civilization. As such, it served as a potent weapon to make people aware. I will try to do what I can to restore my account.” The user also thanked people who tweeted in his support.

Moderna to the Rescue?