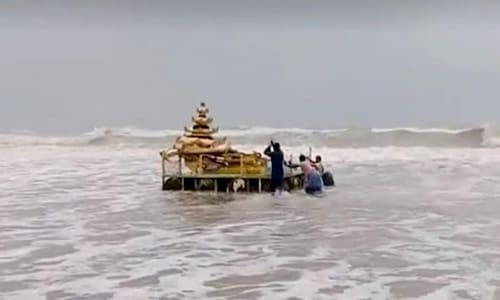 During turbulence caused by Cyclone Asani on Tuesday, residents living near Sunnapalli Sea Harbour in Andhra Pradesh dragged out a mystery gold-coloured chariot that washed ashore at Andhra Pradesh’s Srikakulam.

“It could have come from another nation,” stated the sub-inspector (SI) of Naupada in the Srikakulam district.  Speaking to news agency ANI, an official said that higher officials had been informed about the situation and appropriate action will be taken. A video tweeted by news agency ANI showed people on the shore dragging out the chariot and bringing it out of the water.

“It could have come from another nation,” stated the sub-inspector (SI) of Naupada in the Srikakulam district. We notified the intelligence community and senior levels. Meanwhile, on Wednesday morning, Cyclone Asani passed close to the coast of Andhra Pradesh, however, the severe cyclonic storm was downgraded to a cyclonic storm.

The state of Andhra Pradesh has issued a red alert for the coast. For relief activities, nine SDRF and NDRF teams have been dispatched. The cyclone caused heavy rains in numerous areas across the state. As the storm approached the Andhra coast, torrential rains fell on Visakhapatnam, the state capital.