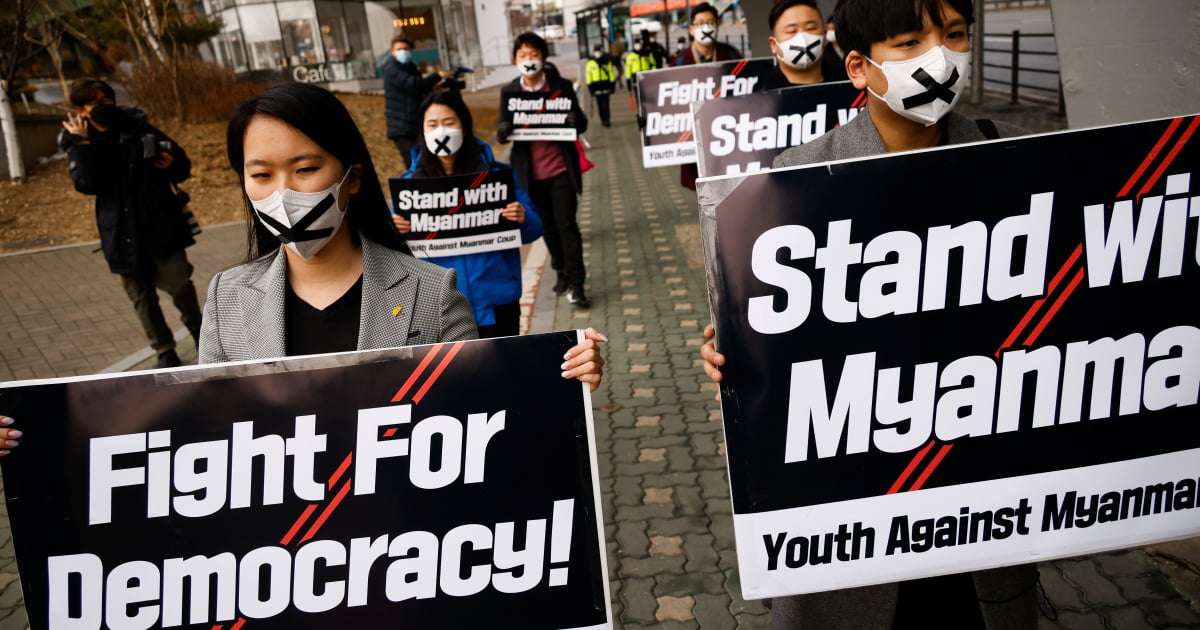 Myanmar or Burma, officially the Republic of the Union of Myanmar is a country in Southeast Asia and it is the largest country in Mainland Southeast Asia. Myanmar has been ruled by the military government for the past 26 years, the first military rule began in 1958 and direct military rule started when Ne Win  captured power through a coup d’état in 1962. Now the question is what is coup d’état? A coup d’état is the removal and seizure of a government and its powers. It is an illegal, unconstitutional seizure of power by a political faction, the military, or a dictator. Burma became a military dictatorship under the Burma Socialist Programme Party under the claim to save the country from disintegration. Myanmar has been in the news for some time now because the ongoing protest. The People of Myanmar have started revolting against the military rule but this is not the first time they have revolted. In 2021 those leading the protest want to preserve the economic possibilities and access to the world.

The History of Protest:

It has always been the hub of political instability since the declaration of Independence from Britain in 1948. In between 1958-1960, the military formed a temporary government under the leadership of U Nu; the country’s democratically elected Prime Minister. In 1960, Burmese General Election was held, and the military voluntary restored civilian government but in less than two years the military seized the power in the 1962 coup. In 1990 free elections were allowed under a particular  believe that the military had major support but the election resulted in the victory of Aung San Suu Kyi’s party, the National League for Democracy. Nevertheless, even after her victory she was placed in house arrest because the military refused to surrender power. The military remained in power until 2011 and elections were held in 2015 resulted in the victory of Aung San Suu Kyi’s party, the National League for Democracy (NLD). In 2021, the coup occurred as a result of the aftermath of the general election on 8th November 2020 in which NLD won 396 out of 476 seats in the parliament on the other hand the military proxy party the Union Solidarity and Development Party won in only 33 seats. Domestic civil resistance efforts in Myanmar known as the Spring Revolution starts in 2021 in disagreement to the “coup d’état” At Myanmar, protesters are on the streets protesting for a month and half of the towns and cities across Myanmar. Security forces, which are made up of police and military under the command of coup leader Gen. Min Aung Hlaing, have responded to the protest with increasing brutality, introducing a countrywide crackdown that includes killing protesters and enforced disappearance. Gen. Min Aung Hlaing, is the commander in chief of the country’s armed forces, the Tatmadaw. Myanmar has been disturbed by the consistent political unrest and mass protest since 1st February 2021.

The Protest and the revolt:

According to the report, at least 2,175 people have been under arrest and 183 protestors have been killed by the security forces even though the protests have been non-violent and peaceful which includes acts of civil disobedience, a military boycott campaign, labor strikes, public protests, red ribbon campaign, formal recognition of election results by the elected representatives, and pot banging campaign. The protesters have also come up with innovative ideas to carry out their protest including lining up placards or coconut painted with the words like “Spring Revolution”. Mahn Win Than said in his public address “this is the darkest moment of the nation and the moment that the dawn is close”.  He is a Burmese politician and lawyer who served as a Speaker of the Assembly of the Union from 2016- 2018 and a Speaker of the House of Nationalities from 2016 until he was removed from his office in the 2021 Myanmar coup d’état. He is currently hiding and leading a group of legislators who have refused to accept the coup.

Security forces opened fire in an area of Myanmar’s largest city, Yangon, with protesters using sticks and knives. The protesters fired slingshots and throw Molotov cocktails towards the line of security fighting back against violent crackdown. It is reported that more than 200 people have been killed since February; two people were shot dead during the protest in Kalay in northwestern Myanmar. Some hurl firebombs and some aimed with slingshots though the forces were far away. A local media and doctor reported that a young man was shot dead by security forces in the Hpakant city, another young man was killed in Bago near the main city of Yangon.

On 17th March night smokes and fires were seen in Kalay and Yangon, it is said that the authorities burned down the barricades that the protesters has set up during the day. Myanmar’s ruling junta has declared martial law in a wide area of the country’s largest city Yangon, as security forces killed dozens of protester in an increasingly dangerous crackdown on resistance to last month’s military coup. The protest against the coup has shown remarkable staying power and it remained peaceful despite the imposition of martial law, limitations on internet access, and extremely violent response from the security.  People are getting injured and were arrested by the police and died due to the tortured during the police interrogation, some were shot in the crackdown and were dragged without any mercy and their dead bodies were not even returned to their families though the junta has denied all the allegations. Government ordered mobile data service to be shut down, Wi-Fi service which is less extensive is left on but there is no speed which is causing great problem for the people to post pictures of the protest on the internet. Several neighborhoods have been under martial law which means they are completely under military control, and it is difficult to protest in those areas.

Pope Francis appealed for an end of the bloodshed on Wednesday as an image of a nun in Myanmar kneeling in the street in front of the armed forces begging not to shoot the protesters, this image was widely broadcasted and Pope Francis said “I, too, kneel on the streets of Myanmar and say: may violence cease.” Protesters response to the police violence was brutal and when they were attacked they took the path of self defense.

A statement was released by the Committee Representing Pyihtaungsu Hluttaw which is the organization of elected members of the parliament whom the military banned from talking their seats but have settled themselves in their place as the government; announced that the general public has the full right to defend themselves against the security forces. In other country’s Burma’s a also protesting and showing their support, in United States on 3rd February 150 Burmese Americans protested in front of Embassy of Myanmar in Washington DC, 6th March in Tennessee United States they gathered at the Tennessee State Capitol in Nashville and then they engage in a march to encourage U.S. and Tennessee leader to compel restrictions on the Burmese military. Protests were held in other places by the Burmese population in order to show support.