Several photos of Akshata Murthy have gone viral, showing her serving tea to journalists who were waiting outside her house. Akshata Murthy is the daughter of Infosys founder Narayan and Sudha Murthy. She married Rishi Sunak, who is contending to be the next British Prime Minister. After resigning from Boris Johnson’s government a few days ago, Rishi Sunak kept a low profile. He served as Chancellor of the Exchequer. Along with his resignation, nearly 50 ministers resigned, resulting in a political crisis in the UK and the resignation of Boris Johnson. As per various reports, journalists and photographers had gathered outside Rishi and Akshata’s home to interview him. However, they saw Akshata Murthy coming out of her apartment to serve them tea and biscuits on a tray. ☕️ After his shock resignation last night, Rishi Sunak's wife Akshata Murthy brings out a round of tea for journalists waiting for him to show his face. pic.twitter.com/Yt8ldN2aX9

Big thanks to @RishiSunak’s wife who very kindly brought us tea and biscuits outside his house!

Since her pictures went viral, people have pointed out that the tea was served in Emma Lacy mugs, which cost 38 pounds each (Rs 3,626). One netizen wrote, “tone-deaf!! The price of that mug could feed a family for 2 days!!” as a criticism of Rishi Sunak’s move to raise taxes during the pandemic. 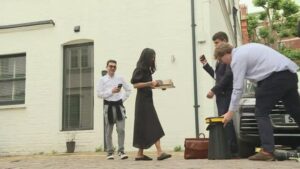