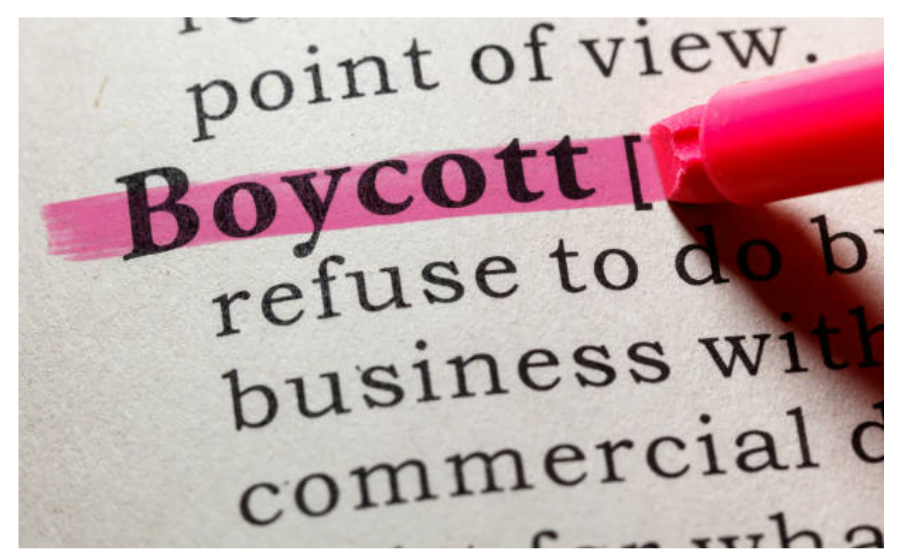 There was a period of time when one had to be careful when it came to the usage of the term ‘boycott’. But that does not seem to bother anyone anymore. At least not the people who live in democratic countries with internet access and social media accounts. With each passing day more and more netizens are made aware of the tremendous impact they have over the way things work. (To my older audience or anyone who still stands oblivious to the term ‘netizens’; it simply refers to a person who is an active participant in the online community of the internet.) Boycotting trends have been on the rise in the recent past.

But why trouble ourselves with knowing about these you may ask, well these “boycott” trends on social media, when present in vast numbers, can create some serious problems, not only for the parties that are deemed to be boycotted but also for the general social atmosphere of a society. You see, these trends can be understood as indicators of sorts; Indicators that point towards the climate of the society. This could signify many things like, international relations, political climate, communal clashes, etc. The basic idea remains the same; there exists a group of people who are unhappy with something.

As we move further, I’ll have the readers know that this article doesn’t intend to determine or pass an opinion on whether these “boycott” trends are valid/invalid. We might open that pandora box some other day. But for now, we focus on the ‘cancelled’ and not ‘getting cancelled’ ourselves (or at least that’s the hope).

With that out of the way, here’s a list of the 7 things that netizens wanted to ban this past month,

Starting with the latest trend which was against the FabIndia. The clothing brand faced peril when it released its newest festive collection meant for this year’s Diwali season called ‘Jashn-e-Riwaaz’. Netizens called it “de-Hinduisisation” and “Abrahamisation” of Diwali as they seemed to be upset with the choice of words used to name the collection. The company ended up taking down the tweet and the ad promo eventually.

The “King-Khan” of Bollywood has been under some bad light himself ever since the arrest of his son Aryan Khan. Recently, a picture of SRK along with PM Imran Khan from 2008 went viral and that was enough to get #BoycottSRK trending. Things took a weird turn when many started associating Khan’s new film, Pathan (where he plays the role of a Muslim RAW agent), with him being “Pro-Pakistani”.

There have been many calls made to ban the very brands that Khan promoted including ‘BYJU’S’, ‘BigBasket’, ‘Fair nd Hansome’, amongst others. The fundamental reason for these seemed to be “bad-influence” amongst other reasons including what seemed to be Khan’s political preference and mere trolling.

This clothing brand was under the heat for its advertisement which put forth the idea of what it called “#KanyaMaan”. The short video starring Alia Bhatt promoted the tagline of “Tradition wahi, soch nayi”. Post five days of its debut, Indian twitterati was all charged-up against it, making “#BoycottManyavar” trend. Netizens called it “hypocritical” and a means of “demeaning the Hindu religion”.

On 17th October, just days before the India Vs Pakistan T20 match, “#BoycottPakistan” trends on Indian Twitter. I believe there’s no need to elaborate on that one. Mutual relations amongst the two South-Asian nations have been stressed for quite sometime now. And although there are some who ask for such bans, their wants are often overlooked as they tend to be the minority. Not to be forgotten, India Vs Pakistan matches tend to fetch a lot of money. Money that a lot of people won’t like to lose.

On 21st October, ‘#ShameOnYouCeatTyres’ was trending on number one. Indian twitterati was enraged at actor Aamir Khan’s new advertisement. In the said advertisement, Khan was seen to be calling out on the practice of bursting crackers on the road. Furious netizens called the ad “Hindu-phobic” and “hypocritical”. Some even said that they were waiting for a similar advertisement that would call out the practice of Namaz on roads.

The famous food delivery app was in the spotlight for bad reasons on the 19th of October. The issue began when a customer care agent refused to refund since the customer didn’t know Hindi. Mind you, this happened in the southern state of Tamil Nadu. Further, the agent also added that Hindi is the national language and how everyone should know at least a little bit about it. The tweets put up by the customer soon gained momentum. In due course, ‘#RejectZomato’ was trending. Ultimately, Zomato ended up tweeting an official statement apology whilst mentioning that they had fired the agent concerned and that they would work on a Tamil version of the app.

The popular fast-food brand was not so popular amongst the people of Karnataka as ‘#RejectKFC’ trended on twitter. The trend could be traced back to a video that was posted a while back. The video showed a KFC staff refusing to play a Kannada song as “Hindi is the national language of India”. The KFC India Spokesperson issued a statement mentioning that the video was outdated and that KFC has the highest respect for cultural values of all communities.

These, alongside a plethora other trends reflect the collective mentality of the contemporary society. These “Boycott trends” not only depict the nature of people’s reaction and what they think but also portray the subtleties of the many changes that are taking place around us. Time and time again we are reminded of just how powerful media can be. The use of images, choice of words, tone of phrases; they all matter so much. Goes to show how anyone with good knowledge on the same can enchant heaps of people into doing something they want…