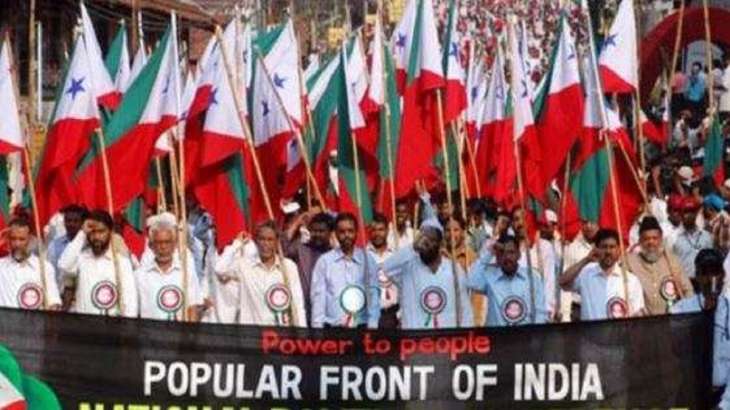 The government of India has declared the Popular Front of India and its associates or affiliates or fronts as unlawful associations with immediate effect for a period of five years.

In addition to this, PFI’s associate organizations – Rehab India Foundation (RIF), Campus Front of India (CFI), All India Imams Council (AIIC), National Confederation of Human Rights Organization (NCHRO), National Women’s Front, Junior Front, Empower India Foundation and Rehab Foundation, Kerala – were also banned. This comes close on the heels of a countrywide raid on September 22 when 109 members of the groups were arrested by the NIA and other agencies. The ministry in its notification said the PFI and its associates, affiliates, and fronts have been indulging in unlawful activities, which are prejudicial to India’s integrity, sovereignty, and security, have the potential of disturbing public peace and communal harmony, and supporting militancy in the country.

The government is of the opinion that there is no immediate curb or control of the unlawful activities of the PFI while they are continuing its subversive activities, disturbing public order, and encouraging terror-based regressive regime, the notification said.

Reacting to the development, BJP’s national spokesperson, Shehzad Poonawalla, stated on Twitter, “Strong & timely action by Central Government, MHA that has banned the #PFI for a period of five years. But we have seen in the past how Congress, SP, RJD, Left, etc have given political patronage to terror in name of vote bank.

Here are 5 reasons why this radical organization has been banned

1. PFI and its affiliates have been working covertly to increase radicalization of a community by promoting a sense of insecurity, according to MHA notification. This is borne out by the fact that some PFI cadres have joined international terrorist organisations, it stated.

2. Investigations in various cases have revealed that the PFI and its cadres have been repeatedly engaging in violent and subversive acts. Violent acts carried out by PFI members include chopping off the limb of a college professor, cold-blooded murder of persons associated with organisations of other faiths.

3.The PFI shows sheer disrespect towards the constitutional authority of India and with funds and ideological support from outside it has become a major threat to internal security.

4. The office bearers and cadres of the PFI, along with others, are conspiring and raising funds from within India and abroad through banking channels. These funds are integrated through multiple accounts to project them as legitimate and eventually used to carry out various criminal, unlawful and terrorist activities in India.

5. PFI was shown to have links to global terrorist groups with some activists of the organization having joined the Islamic State of Iraq and Syria (ISIS). They also participated in terror activities in Syria, Iraq and Afghanistan. The notification by the government said that some of the members of the PFI were also found to be members of Campus Front of India (CFI), Empower India Foundation and Rehab Foundation, Kerala.

The government has termed the relationship between these associate organizations as a ‘hub and spoke’ relationship with the PFI acting as the hub and utilizing the mass outreach and fundraising capacity of its affiliates. “These fronts function as ‘roots and capillaries’ through which the PFI is fed and strengthened,” added the notification.

The Income Tax Department canceled the registration granted to the PFI under section 12A or 12AA of the Income Tax Act, 1961 (43 of 1961) as the sources of deposits on its behalf with respect to its several bank accounts were not supported by the financial profiles of the account holders and the outfit’s activities were not being carried out as per their declared objectives.